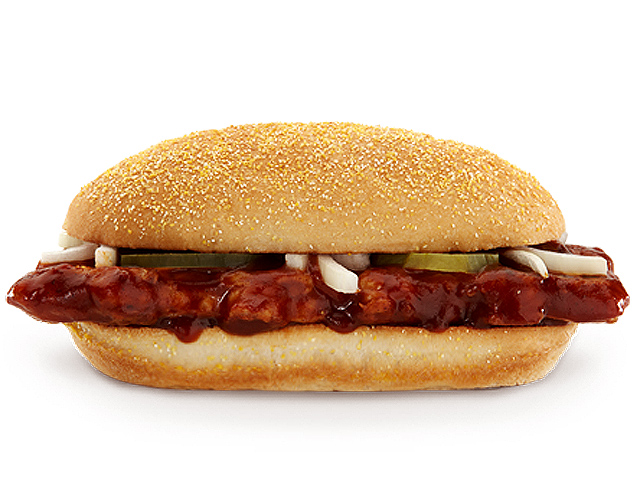 (CBS/AP) The return of the McRib may have McDonald's customers licking their chops, but critics of the fast food industry are blasting the pork sandwich some have dubbed "barbecue without the bones."

"Doesn't the word 'rib' mean anything?" Michael Pollan, the author of "In Defense of Food" and other books about eating habits in the U.S., said to CBS News in an email. If there's no rib, he said, "why hasn't the FTC taken an interest in this question?"

The McRib is usually available only when individual restaurants feel like making it, but McDonald's plans to announce Monday that the McRib will be sold at all U.S. locations through Nov. 14.

The boneless patty, dressed with onions, pickle slices and barbecue sauce, was introduced in 1982, developed after the company's then-president decided to add pork to the menu. With 500 calories and 26 grams of fat, according to the McDonald's website, it's slightly trimmer than the Big Mac, which has 540 calories and 29 grams of fat.

"If you eat at McDonald's, it's by no means the worst option from a nutritional point of view," Dr. Marion Nestle, professor of nutrition, food studies, and public health at New York University, told CBS News in an email. But she mocked the sandwich, saying, "Fewer calories than a Big Mac! Practically a diet food!"

Pollan and Nestle may not be fans, but the McRib has something of a cult following. There is a Facebook group called "Bring Back the McRib!!!" There are Twitter tags, where posts range from "Lucky me, the McRib is back" to "If you eat McRibs, you need to re-evaluate what it is you actually want in life."

It's usually up to the local franchise to decide if or when to sell the McRib (except in Germany, where it's available year-round, McDonald's Corp. says). But last November, for the first time in 16 years, McDonald's made the McRib available at all U.S. restaurants for about three weeks.

It was a smash, and while McDonald's declined to provide specific sales numbers, it was enough to convince the world's biggest burger chain to give it another run.

If the McRib is really so popular, why not just offer it all the time? McDonald's has found that absence makes the heart grow fonder.

Said Marta Fearon, McDonald's U.S. marketing director, "Bringing it back every so often adds to the excitement."

What do you think? Is the McRib's return good news - or bad?