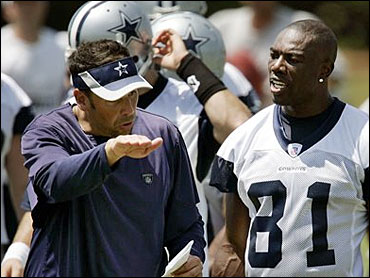 Dallas Cowboys assistant coach Todd Haley is suing a suburban Dallas McDonald's, claiming his wife and the family's live-in baby sitter found a dead rat in a salad they took home and began to eat.

In addition to Haley, the Cowboys' passing game coordinator who got in a well-publicized shouting match with receiver Terrell Owens earlier this month, the suit was also filed on behalf of his wife Christine and the family's au pair, Kathryn Kelley.

A message left for McDonald's Corp. spokesman Walt Riker on Thursday evening was not immediately returned. The company is based in Oak Brook, Ill.

According to the lawsuit, Christine Haley and Kelley had eaten part of the salad purchased June 5 at a McDonald's in Southlake before the rat was discovered. The women became violently ill and endured long-lasting physical injuries, the lawsuit said.

Believed to be a juvenile roof rat, the rodent was about 6 inches long and was found on its back with its mouth opened, Scott Casterline, a spokesman for the family, told The Associated Press.

He said the women didn't find it until taking the salad home to eat, and that a manager from the McDonald's "didn't offer any comfort" after driving to their house to investigate. The suit was filed after the restaurant didn't follow through on promises "to make things right," he said.

"The family needs closure," said Casterline, whose family's law firm is representing the plaintiffs. "It came to a point where you have to draw a line."

Ken Lobato, owner-operator of the McDonald's in Southlake, told the Morning News that he hadn't seen the suit and couldn't respond.

"Nothing is more important to us than the safety and well-being of our customers," he said. "We maintain the strictest quality standards. We take these matters seriously and are conducting a full investigation to get all the facts.

"In my years as an owner-operator, I've never seen anything like this."

In the Cowboys' loss to Philadelphia on Oct. 8, Owens was seen screaming at Haley on the sidelines. Owens later said his relationship with Haley was ruined, but then said after his three-touchdown game against the Texans on Oct. 15 that there was mutual respect between the two.