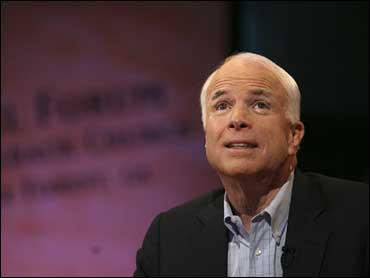 The world according to John McCain is one in which America is triumphant at home and abroad thanks to the Bush legacy, rolling to victory internationally and mastering its domestic economic problems. If daily news, like reports of the ten French soldiers killed by a resurgent Taliban in Afghanistan and the US government's imminent nationalization of much of the American mortgage-lending industry, would seem to deny such a rosy scenario, then that only shows skeptics lack the courage that sustained McCain as a prisoner of war in Vietnam.

There you have it encapsulated, the McCain campaign for President, an irrational mélange of patriotic swagger and blindness to reality that is proving disturbingly successful with uninformed voters. How else to explain the many millions of Americans who tell pollsters they prefer a continuation of Republican rule when so many of them are losing their homes to foreclosure and the nation is devastated by out-of-control military spending?

The economy is in a downward spiral, the national debt is at an all-time high, the dollar is an international disgrace and inflation in July had the steepest rise in twenty-seven years, driven by oil prices fivefold higher than when George W. Bush invaded the nation with the world's second-largest petroleum reserves.

While the oil-rich Mideast nations we protect refuse to fully open the oil spigots as payback for our military efforts, McCain celebrates General David Petraeus as his number-one hero for "victory" in Iraq. Aside from the reality that victory there is now defined as returning to the level of stability provided by Saddam Hussein, who the Bush Administration admits had nothing to do with the bin Laden-led terrorists, even that goal requires the cooperation of our former sworn enemies, Iran's ayatollahs.

Presumably McCain envisions a more favorable outcome for Georgia, to which he would commit the unqualified support of the United States with his outrageously overreaching statement that "we are all Georgians." If Democratic presidential candidate Barack Obama had been in contact with the leader of a nation before and after that nation provoked a war, his campaign would be a shambles. Not so McCain, who is acting as if he is already the elected Commander in Chief ensconced in a reconstituted neoconservative-dominated White House. By contrast, Secretary of State Condoleezza Rice has been reduced to a blustering bystander.

That military victory in Iraq and any other trouble spot is the key selling point of the McCain campaign is odd, because McCain's credentials derive from participation in a war that resulted in the most ignominious defeat in US history. How else to think of the loss of almost 59,000 Americans and 3.4 million Indochinese in a war that even McCain has long since not seriously tried to defend. Surely McCain accepted the notion that a Communist Party-run Vietnam was compatible with US security interests when he, along with Senator John Kerry, led the fight for US recognition of Vietnam.

Wouldn't it have been grand if McCain, who made his own pilgrimage of reconciliation to Hanoi, would have drawn the proper lesson from that sad chapter in American history--that victory isn't everything it's cracked up to be? Or, by extension, from the recent Olympic festivities in still-Red China, where Bush was photographed quite happily near portraits of the once-dreaded Chairman Mao, whom US propaganda had long described, quite erroneously, as chief sponsor of the Vietnamese communists.

We are reminded of how brilliant Republican Richard Nixon was in rejecting the neoconservative addiction to the cold war that McCain embraces when the late President traveled to Beijing to make peace with the man previously depicted as the bloodiest of communist dictators. It turns out that the various communist movements were nationalist above all else, and when we "lost" in Vietnam, the result was not attacks on the United States but a war between China and Vietnam.

The lesson McCain should have learned is that the world is a complex place, that today's enemies may be tomorrow's negotiating partners--as Obama has at times dared to suggest--and that the neoconservative idea of a Pax Americana is a dangerous fantasy. And a costly one at that, not only in lost lives and blowback from the regions we destabilize but also in the dollars that American taxpayers must waste.

Thanks to the absurdly misdirected "war on terrorism" that McCain so enthusiastically supports, we spend more annually in inflation-adjusted dollars on the military than at any time since World War II, even more than during the Korean and Vietnam wars. Vote for McCain and forget about funding to solve the Social Security, Medicare and subprime mortgage disasters or for anything else that truly would make America stronger.

By Robert Scheer
Reprinted with permission from The Nation