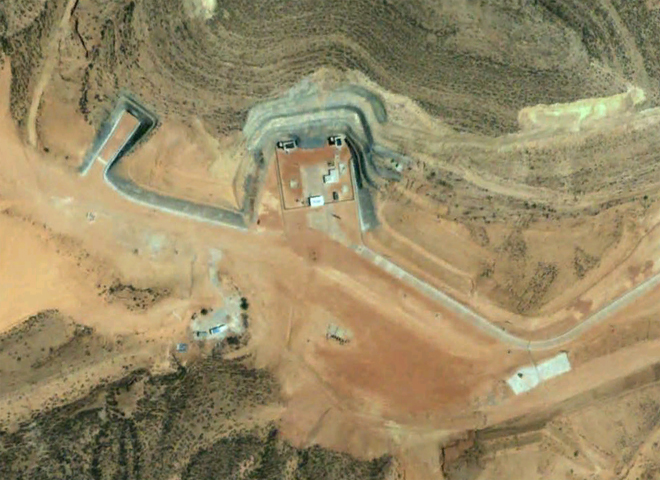 Sen. John McCain said that as Libyan leader Muammar Qaddafi faces an "inevitable" end, the U.S. should concern itself with helping contain weapons from Qaddafi's arsenal.

"We've got to secure these weapons depots," the Arizona Republican said on CBS' "The Early Show" Tuesday. "that have huge, huge numbers of weapons, and apparently mustard gas and other weapons of mass destruction."

CBS News foreign affairs analyst Pamela Falk writes that there are fears Qaddafi, in taking his last stand against the rebels who now control most of Tripoli, "could use his formidable supply of mustard gas, serious artillery, or disperse his supporters - mercenaries and troops - into Libya, without uniforms, for later attacks."

After the United States brought Libya's chemical warfare program to the attention of the world in 1988 - blister and nerve agents were produced, before the Rabta chemical facility was shut down - Qaddafi's regime began construction of an underground chemical munitions facility near Tarhunah, about 60 kilometers southeast of Tripoli.

The BBC reports that Qaddafi may have around 10 tons of mustard gas, though the storage site will likely have been monitored and perhaps already secured by Western special forces.

Although Qaddafi's nuclear program was shut down in 2006, a February 2011 Wall Street Journal article indicated that Qaddafi still possesses caches of mustard gas and other chemical weapons, as well as a stockpile of Scud B missiles and 1,000 metric tons of uranium yellowcake.

That same month, Michael Luhan, spokesperson for the Organization for the Prohibition of Chemical Weapons, told the Associated Press that Libya had destroyed "nearly 13.5 metric tons" of its mustard gas in 2010, representing just over half of its stockpile.

Falk says there are also serious questions about how Libyans can rebuild a new government - one with democratic institutions - after 42 years of a regime that brutally squelched dissent.

CBS News correspondent Barry Petersen, reporting from Tripoli, said Qaddafi's family chalked one up against the rebels with Muammar's son Saif - whom the rebels claimed yesterday to have captured - turned up outside his father's compound, alive and well, wearing battle fatigues and flashing a Victory sign. Bravado, Petersen says, from a man who was reportedly in custody and maybe on his way to the International Criminal Court at The Hague, bravado that rapidly descended into insults.

"I want to deny all the rumors," he said. NATO and the West, he said, were using their "technological tricks," including jamming broadcasts from state television, to confuse the Libyan people and spread chaos and fear.

He was more than blunt about any chance he would be captured and brought to Western justice. As he said, "Screw the Criminal Court."

Petersen says that today much of the capital remains calm, with most people continuing to celebrate the fact that Qaddafi's reign is coming to an end. But sporadic fighting continues, with the focus on Qaddafi's compound. "A lot of fighting around the hospital" as well, Petersen added. "We've heard that two doctors have been killed by sniper fire."

McCain said that, despite Saif al-Islam Qaddafi's "little PR coup," there's an "inevitability" about Qaddafi's downfall. "How long it takes and how long he holds out, I can't tell you exactly.

"It could be difficult, because use of air power to a large degree is negated when you get into this kind of urban warfare, and it's hard to identify targets, and hard to be effective," he told anchor Erica Hill. "But I don't think there's any doubt of the eventual outcome.

"I think we ought to really be turning our attention to national reconciliation, to not having revenge killings going on, and I'm glad to see that the Transition National Council has been emphasizing that."

McCain also said it was important to free the hundreds, perhaps thousands of political prisoners being held in Libyan jails.

When asked about the U.S. role in a post-Qaddafi Libya, McCain said, "I think we should, with the Europeans - and I hope the Europeans would take a leadership role in this, they have much more vital interests in Libya than we do - provide them with the ability to govern. They haven't had a real government, as you know. The technocrat sides of it, how to provide goods and services to the people."

He advocated for freeing up the approximately $30 billion in frozen Libyan assets in the U.S. "so they can start rebuilding their country."

"But, most importantly, I think, you start the concept and precept of democratic institutions, so that they would move forward with a democracy. There is a threat of radical Islamic extremism hijacking this, and other revolutions in that part of the world. But I'm confident, and I know their leaders, that with our help, and I'm not talking about money, but with our technological help and other ways, that they will succeed."

McCain was confident the Arab Spring movement would continue to spread, and suggested it was no accident that demonstrations in Syria have recently intensified.

"I think this whole thing started with a young man in Tunisia who burned himself to death, and has spread across the Arab world, and in other parts of the world, too," he said. "I don't think the Chinese feel as secure as they did before this started. I don't think any dictatorship throughout the world is. And so I think this is a movement that we don't know where it will all end, and there will be setbacks and there will be bloodshed, but I think it bodes a much brighter day for people in this world, who otherwise never had the opportunities for democracy and freedom."