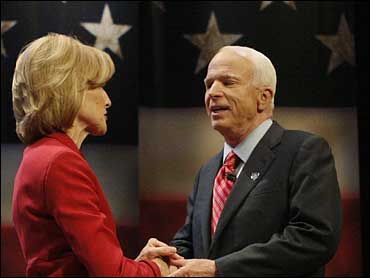 Republican John McCain declined to disavow Thursday the tough criticism by his campaign of his Democratic opponent's experience as a community organizer, saying politics is "tough business" even as he praised Barack Obama's service.

At a live, televised forum on public service timed to coincide with the anniversary of the 2001 terrorist attacks, McCain said he respected Obama's decision after law school to forgo a lucrative career path and become a community organizer in downtrodden Chicago.

"I respect people who serve their community," McCain said. "And Senator Obama's record there is outstanding."

CBS News' Jamie Farnsworth reports that McCain was asked to respond specifically to running mate Sarah Palin's criticism of Obama's community organizing days. "I guess a small-town mayor is sort of like a community organizer, except that you have actual responsibilities," Palin said at the Republican National Convention last week.

"Look, Governor Palin was responding to the criticism of her inexperience and her job as a mayor in a small town," McCain said. "Of course I respect community organizers."

Later, Obama noted that "we've had an awful lot of small town mayors at the Democratic convention."

"The mayors have some of the toughest jobs in the country because that's where the rubber hits the road," he said. "We yikety yak in the Senate. They actually have to fill potholes and trim trees and make sure the garbage is taken away."

McCain paid tribute to Obama for inspiring "millions of Americans who otherwise wouldn't have been involved in the political process," while giving himself credit for attracting voter turnout with "my record of service and my vision for the future."

He said the negativity that has infused the presidential race - on hiatus for one day in honor of the Sept. 11 anniversary - could have been avoided had Obama accepted his proposal for the two to tour the country together doing town-hall meetings, a format in which McCain shines best.

"I think the tone of this whole campaign would have been very different," the GOP nominee said during the Service Nation Presidential Candidates Forum, held at Columbia University.

At one point, McCain criticized the university for not allowing the ROTC program on campus. Farnsworth reports that McCain's comments brought a loud cheer from the crowd of students gathered on steps near the hall to watch the event on a projector. (Later, Obama also called for ROTC to be allowed on the Columbia campus.)

McCain was followed to the stage by his Democratic opponent. They shook hands before McCain departed.

The event amounted to back-to-back live interviews of the two candidates - the forum was broadcast live on some cable networks - by Judy Woodruff of PBS' "NewsHour" and Richard Stengel, managing editor of Time magazine. The 1,000-member audience included relatives of Sept. 11 victims, veterans, policy leaders, students and celebrities such as Caroline Kennedy, R&B singer Usher, and actors Tobey Maguire and Leonardo DiCaprio.

Recently, McCain campaign surrogates derided Obama's experience as too thin to qualify him for the White House. But that line of attacked subsided somewhat after McCain chose Palin, a former small-town mayor who has been Alaska's governor for less than two years, as his running mate.

"This is a tough business," he said. "Has it been rough? Of course."

He added: "The people make the final judgment with their votes."

McCain also said he would have asked Americans to serve after the 2001 terrorist attacks by joining neighborhood watches or helping guard nuclear plants, offering an implicit criticism of President Bush's approach seven years ago.

Bush has been criticized for a speech given about two weeks after the Sept. 11 attacks, in which he exhorted the public to "do your business around the country, fly and enjoy America's great destination spots, get down to Disney World in Florida." Though Bush emphasizes the importance of volunteerism and service, he didn't ask Americans to respond to the attacks - or to participate in the Iraq war - through personal sacrifice.

Obama has promised that a call to service would be a cornerstone of his presidency, and also has criticized Bush for asking Americans eager to pitch in after the attacks merely "to shop."

The expansion of government national service programs he has proposed would cost $3.5 billion a year, including a new "Green Vet Initiative," increasing the all-volunteer military, expanding AmeriCorps, doubling the size of the Peace Corps, expanding service programs involving retired people, and creating a tax credit making the first $4,000 of college tuition free for students who conduct 100 hours of public service a year.

McCain, asked about Obama's proposal, said: "I'd be glad to spend money." But he quickly added that "it doesn't always have to be run by the government."