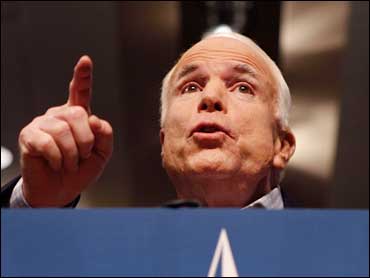 Barack Obama has his William Ayers connection. Now John McCain may have an Iran-Contra connection. In the 1980s, McCain served on the advisory board to the U.S. chapter of an international group linked to ultra-right-wing death squads in Central America.

The U.S. Council for World Freedom aided rebels trying to overthrow the leftist government of Nicaragua. That landed the group in the middle of the Iran-Contra affair and in legal trouble with the Internal Revenue Service, which revoked the charitable organization's tax exemption.

The council created by retired Army Maj. Gen. John Singlaub was the U.S. chapter of the World Anti-Communist League, an international organization linked to former Nazi collaborators and ultra-right-wing death squads in Central America. After setting up the U.S. council, Singlaub served as the international league's chairman.

McCain's tie to Singlaub's council is undergoing renewed scrutiny after his campaign criticized Obama for his link to Ayers, a former radical who engaged in violent acts 40 years ago. Over the weekend, Democratic operative Paul Begala said on ABC's "This Week" that this "guilt by association" tactic could backfire on the McCain campaign by renewing discussion of McCain's service on the board of the U.S. Council for World Freedom, "an ultraconservative right-wing group."

In two interviews with The Associated Press in August and September, Singlaub said McCain became associated with the organization in the early 1980s as McCain launched his political career. McCain was elected to the U.S. House in 1982.

Singlaub said McCain was a supporter but not an active member.

"McCain was a new guy on the block learning the ropes," Singlaub said. "I think I met him in the Washington area when he was just a new congressman. We had McCain on the board to make him feel like he wasn't left out. It looks good to have names on a letterhead who are well-known and appreciated.

"I don't recall talking to McCain at all on the work of the group," Singlaub said.

McCain has said he resigned from the council in 1984 and asked in 1986 to have his name removed from the group's letterhead.

"I didn't know whether (the group's activity) was legal or illegal, but I didn't think I wanted to be associated with them," McCain said in a 1986 newspaper interview.

Singlaub does not recall any McCain resignation in 1984 or May 1986. Nor does Joyce Downey, who oversaw the group's day-to-day activities.

"That's a surprise to me," Singlaub said. "This is the first time I've ever heard that. There may have been someone in his office communicating with our office."

"I don't ever remember hearing about his resigning, but I really wasn't worried about that part of our activities, a housekeeping thing," said Singlaub. "If he didn't want to be on the board that's OK. It wasn't as if he had been active participant and we were going to miss his help. He had no active interest. He certainly supported us."

On Tuesday, the McCain campaign addressed the resignation by saying that the candidate disassociated himself from "one Arizona-based group when questions were raised about its activities."

Taking an opportunity to attack the Obama-Biden ticket, the McCain campaign added that as a House member and later as a senator, McCain fought against communist influence in Central America while Sen. Joe Biden tried to cut off money for anti-communist forces in El Salvador and Nicaragua.

The renewed attention over McCain's association with Singlaub's group comes as McCain's campaign steps up criticism of Obama's dealings with Ayers, now a college professor who co-founded the Weather Underground in the 1960s and years later worked with Obama on the board of an education reform group in Chicago. Ayers held a meet-the-candidate event at his home when Obama first ran for public office in the mid-1990s.

Months before the cutoff, top Reagan administration officials ramped up a secret White House-directed supply network run by National Security Council aide Oliver North, who relied on retired Air Force Maj. Gen. Richard Secord to carry out the operation. The goal was to keep the Contras operating until Congress could be persuaded to resume CIA funding.

"It was noted that they were trying to act as suppliers. It was pretty good cover for us," Secord, the field operations chief for the secret effort, said Tuesday in an interview.

The White House-directed network's covert arms shipments, financed in part by the Reagan administration's secret arms sales to Iran, exploded into the Iran-Contra affair in November 1986. The scandal proved to be the undoing of Singlaub's council.

In 1987, the Internal Revenue Service withdrew tax-exempt status from Singlaub's group because of its activities on behalf of the Contras.

Peter Kornbluh, co-author of "The Iran-Contra Scandal: A Declassified History," said the Council on World Freedom was crucial to diverting public attention from the Reagan White House's fundraising for the Contras.

Singlaub and the council publicly urged private support for the Contras, providing what Singlaub later called "a lightning rod" to explain how the rebels sustained themselves despite Congress' cutoff.

In October 1986, the secrecy of North's network unraveled after one of its planes was shot down over Nicaragua. One American crewman, Eugene Hasenfus, was captured by the Nicaraguan government. At first, Reagan administration officials lied by saying that the plane had no connection to the U.S. government and was part of Singlaub's operation.

"I resented it that reporters thought it was my plane. I don't run a sloppy operation," Singlaub told The AP.

In an interview last month, Downey, the full-time employee of Singlaub's council, said she has a clear memory of McCain resigning in 1986, but not earlier.

"It was during the time when the U.S. Council had been wrongly accused of being owners of the Hasenfus plane downed in Nicaragua," said Downey. "A couple of days after that, I was in Washington and called home to get messages from my mother. I returned that call and a staff person wanted to ask for the resignation of Congressman McCain."

When Hasenfus was shot down, McCain was in the final month of his first campaign for the U.S. Senate seat he still holds.

McCain's office responded quickly. McCain said he had resigned from the council in 1984. Further, McCain said that in May 1986 he asked the group to remove his name from the letterhead. McCain's office produced two letters from 1984 and 1986 to back his account.

The dates on the resignation letters in 1984 and May 1986 coincided with McCain election campaigns and increasingly critical public scrutiny of the World Anti-Communist League, the umbrella group Singlaub chaired.

"That was putting it mildly," Anderson wrote in a Sept. 11, 1984, column on alleged death squad murders, an article that appeared two months before the U.S. election day.

Two weeks after Anderson's column, a letter from McCain addressed to Singlaub asks that the congressman's name be taken off the board because he didn't have time for the council.

Singlaub told AP that "certainly by 1984," he had purged the World Anti-Communist League of extremists. Singlaub complains that American news media wrote that the league hadn't gotten rid of extremist elements and tried to tarnish the league's credibility, "making something evil out of fighting communism."