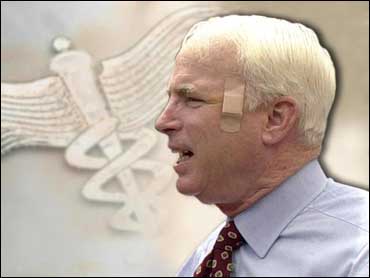 Sen. John McCain was upbeat after doctors removed a non-cancerous lesion on his nose, saying he's "had worse bouts with the dentist."

The Arizona Republican and former presidential candidate was scheduled for plastic surgery on Tuesday to cover a scar from the procedure. Doctors planned on removing some skin from an adjacent area to cover the scar.

With a bandage covering the tip of his nose, McCain told reporters outside his Phoenix home that the Monday procedure was minor and that it lasted only 10 minutes.

His office said the lesion, a tiny freckle on the left side of the senator's nose, was not life-threatening.

The office first said the lesion was an early case of melanoma, but the senator later clarified that the lesion had not developed into cancer. He said it could have turned cancerous if it had not been treated.

McCain said the procedure was unrelated to two past cases of melanoma.

McCain had a lesion removed from his upper arm in 1993 and his temple during his 2000 presidential campaign.

McCain said he noticed a slight discoloration on his nose two or three weeks ago, prompting a biopsy that determined it was nonmalignant.

The procedure was performed at Mayo Clinic Hospital. McCain was under local anesthesia during the surgery. He spent Monday night at home.

The senator, who expects to head back to Capitol Hill next week, was likely to spend Tuesday night in the hospital after the plastic surgery.

Melanoma affects more than 53,000 Americans every year and kills about 7,000. It usually afflicts fair-skinned people and is caused by exposure to the sun.