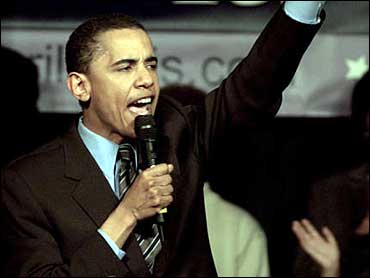 When first-term Illinois Senator Peter Fitzgerald announced last year he would not be seeking reelection in 2004, he seemed to be handing Democrats a golden opportunity to pick up a Senate seat. The state GOP was still reeling in the wake of a series of scandals, Democrats had claimed the governor's mansion and the statehouse in the 2002 elections, and Illinois's changing demographics were pushing the state to the left. The early favorites for the Democratic nomination were Dan Hynes, the 35-year-old state comptroller and son of longtime machine politician Tom Hynes, and Blair Hull, a former securities trader worth about $500 million. Hynes's clout impressed some, but many political observers believed that Hull's deep pockets would prove impossible to surmount.

But last night, as the primary returns rolled in, Hynes and Hull were both giving concession speeches and a young state senator named Barack Obama was declaring victory. How did Obama manage to overcome Hynes's reputation and Hull's personal wealth? The answer, in a nutshell: McCain-Feingold. In fact, it is possible that Obama is the first politician to be able to attribute an election victory in such large part to campaign finance reform. It is almost certain that he will not be the last.

One of the least-noted provisions of McCain-Feingold was the so-called millionaires' amendment, which raised the cap on personal donations for candidates running against self-funded millionaires. The amendment created a formula, based on the voting-age population of the state, that computes the amount a candidate may invest in his own campaign. Every dollar a self-funded candidate spends above the determined amount raises the donation cap for his opponents, up to a maximum of $12,000. (The standard donation cap is $2,000.)

The amendment was sponsored by Illinois Senator Dick Durbin to address a perceived problem in early drafts of McCain-Feingold: that eliminating soft money would amplify the advantage of millionaire candidates, since major parties could no longer flood their non-millionaire candidates with enough cash to reasonably compete. The amendment was hardly altruistic: In 1998, Durbin had watched banking heir Peter Fitzgerald wrest Illinois's other Senate seat from Carol Moseley Braun by spending $14 million of his own money. Fitzgerald overcame his own limited personal appeal by sequestering himself in the final days of the campaign and bombarding the airways with negative ads.

In many ways, Fitzgerald was the model for Hull, whose strategy was to spend early and spend often. Six months before the election, he had already spent $6.3 million of his fortune on signs, television advertising, and a series of gimmicky bus trips with seniors to Canada to buy prescription drugs. By late February he had spent over $20 million of his own money, and the strategy seemed to be working. Despite his complete lack of political experience, Hull was claiming 24 percent in the polls, ahead of 15 percent for Obama, and 11 percent for Hynes.

To be sure, Obama did not overcome this deficit solely because of McCain-Feingold. With an impressive resume -- he was the first black editor of The Harvard Law Review -- and endorsements from both The Chicago Tribune and The Chicago Sun-Times, he didn't lack for political appeal. He also got some help from Hull, whose candidacy imploded following a series of revelations about his personal life -- first that he hadn't bothered to vote in several recent elections; then, that his ex-wife had sought a civil order of protection against him; and finally, after he released his sealed divorce records, that his ex-wife had alleged he called her a "(big-time expletive deleted)" and punched her in the shin.

But Obama wouldn't have been able to take advantage of Hull's collapse if he hadn't exploited the millionaires' amendment to raise as much money as he did. Of course, McCain-Feingold didn't hand Obama the money; he still had to raise it. And it's a testament to the passionate, Howard Dean-like devotion he inspired that so many donors were willing to fork over such large amounts. (This phenomenon was not limited to the well-heeled. To wit, full disclosure: I turned my twenty-fifth birthday party into a kegger for Obama and raised $1,200 from my largely broke 20-something friends.) But the millionaires' amendment allowed Obama to convert the intense support felt by a relatively small number of wealthy donors -- among them George Soros, Michael Jordan, and a number of college professors and public intellectuals -- into television spots and a field operation that reached a wide audience. Meanwhile, as Hull kept digging deeper into his own pockets, the donation cap kept rising, meaning Obama could continue to return to the same loyal supporters for more and more money as the campaign wore on. "[The millionaire amendment] really did a great job in what it set out to do: leveling the playing field," says Obama Finance Director Claire Serdiuk.

Indeed, of the $5.6 million Obama raised during the campaign, $3 million came from 480 individual donors who contributed more than the usual limit of $2,000. Without the millionaires' amendment, those 480 donors only could have contributed $960,000 -- a difference of over $2 million, or more than a third of Obama's campaign war chest.

Campaign finance reformers would be entitled to celebrate Obama's triumph -- but they're quick to the point out that the millionaires' amendment could create as many problems as it solves. For one thing, says Paul Sanford of the Center for Responsive Politics, the amendment overwhelmingly favors incumbents, "because most of the time, the millionaire candidates are challengers. The incumbent candidates don't need to be millionaires because they can raise a lot of money." Also, if the rationale for capping donations is to limit corruption, or the appearance thereof, there's no reason to suppose that a candidate is any less corruptible just because he happens to be running against a millionaire. Because Obama's politics are decidedly non-corporate, and much of the support from his biggest donors came when he still looked like a long-shot, fears that he will serve their interests unduly are easy to dismiss. (It's hard, for example, to imagine University of Chicago professors suddenly leaning on Senator Obama to stick a loophole for public intellectuals into the tax code.) But Obama won't be the last candidate to benefit from the amendment, and it's not hard to conceive of a scenario in which the effects of the amendment wouldn't be so benign, at least for Democrats: Imagine, for instance, a self-funded millionaire liberal who runs a campaign crusading against big pharma, only to be beaten back by a windfall of $12,000 checks from Merck executives. In fact, Republicans stand to gain plenty from the amendment, since half of all GOP senators who lost to Democratic challengers in the last two elections were unseated by self-funded millionaires.

All of this remains very relevant as Obama prepares to face millionaire Jack Ryan in the general election. Ryan put $3.5 million of his own money into his successful bid for the Republican nomination, and he may be tempted to open up his checkbook even further in the general election. But if he's learned anything from observing the Democratic primary, he knows that using his personal fortune will carry a potentially steep cost. Will the threat of Obama's fundraising prowess convince Ryan not to use his own funds? If so, then Barack Obama will have breathed genuine political life into the millionaires' amendment of McCain-Feingold. And that's a good thing -- for now.

Christopher Hayes is a freelance writer living in Chicago.