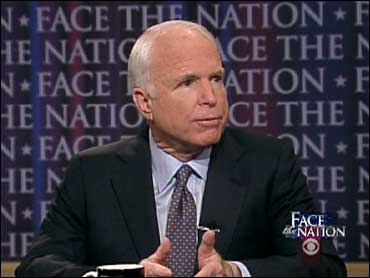 (CBS)
Arizona Sen. John McCain suggested today that the push to investigate and possibly prosecute Bush administration officials who crafted the legal basis for the use of "enhanced interrogation techniques," such as waterboarding, may have grown from a desire to "settle old political scores."

Appearing on CBS' Face The Nation Sunday, the former Republican presidential nominee — who was himself tortured as a prisoner of the North Vietnamese — said, "Are you going to prosecute people for giving bad legal advice?" He suggested that Washington should ignore calls to investigate who was behind government lawyers writing memos which gave legal cover to the use of torture on detainees.

"We need to put this behind us," he told host Bob Schieffer. "We need to move forward. … We need a united nation, not a divided one."

McCain reiterated that he has always opposed torture, noting that it can be a recruiting tool for America's enemies, as was the case with news of America's mistreatment of detainees at Abu Ghraib prison in Iraq. But prosecutions would not ultimately benefit the country, he said. He compared the current situation to President Ford's decision to pardon President Nixon following the Watergate scandal.

"Most people in retrospect believe that the Ford pardon was right, because we moved on. We've got to move on," said McCain.

Schieffer pointed out that those on the other side of the debate would say that people will not believe America is serious about not using torture again unless those involved are "held accountable."

McCain responded that "they're going to be held accountable in the court of public opinion."

"It was bad advice," McCain said of the arguments laid out in the memos recently released by the Obama administration, which outlined the harsh interrogation techniques authorized for use by the Bush White House. "But if you criminalize bad advice on the part of lawyers, how are you going to get people to serve, and what sort of precedent does that set for the future?"

Schieffer asked if Jay Bybee, one of the authors of the memos, should be impeached or asked to resign. Bybee is now a federal judge.

"Well, resignation would be a decision he would have to make on his own," McCain said. "But he falls into the same category as everybody else, as far as giving very bad advice and misinterpreting fundamentally what the United States is all about, much less things like the Geneva Conventions. Under President Reagan, we signed an agreement against torture. We were in violation of that."