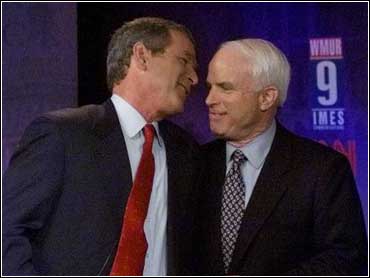 In the final hours of the New Hampshire campaign, the GOP race between Texas Governor George W. Bush and Arizona Senator John McCain is tightening, according to a CBS News poll. While among Democrats, Vice President Al Gore is maintaining a strong lead over former senator Bill Bradley.

McCain is hanging onto a slim 39-35 percent lead over Bush. On the Democratic side, with fewer independent voters, Bradley continues to trail Gore by 16 points. Bradley's recent attacks on Gore do not seem to be having their intended effect.

Bush's father holds some sway in the race: among potential Republican primary voters who view the former president favorably his son holds an electoral edge of 39 percent to 35 percent over McCain. Very few potential Republican primary voters view the former president unfavorably - 11 percent - but among those who do, McCain leads the younger Bush 57 percent to 18 percent.

The two campaign issues of abortion and taxes are also important to the Republican vote, although neither is considered by voters to be a single defining issue. Potential Republican primary voters who favor abortion rights support McCain, and those who oppose legalized abortions support Bush and Forbes, but most of these voters say the abortion issue alone will not determine their vote.

HOW IMPORTANT TO YOUR VOTE IS....?

While registered Republicans cite taxes as the issue they'd most like the government to address in the coming year, when it comes to this primary election, Republican primary voters see taxes as only one of multiple important issues. Eighty-three percent of potential Republican primary voters say that taxes are one of multiple important issues they consider in deciding how to vote. Only 7 percent say it is the single most important issue, and only 9 percent say it doesn't matter to their vote at all.

Despite his emphasis on the tax issue, Forbes continues to trail both McCain and Bush among voters who prefer a flat tax: Forbes receives only 16 percent of these voters to just under one-third each for the front-runners.

Bradley continues to trail Gore in the Democratic race. In fact, there is some evidence that his recent decision to challenge Gore on a host of issues may be backfiring.

Currently, 31 percent of potential Democratic primary voters think Bradley is spending more time attacking Gore than explaining his own positions. Just two weeks ago only 17 percent thought this. Only 15 percent of Democratic primary voters think Gore is spending more time on the attack than on issues - unchanged from two weeks ago.

At the same time, Gore's favorables have been on the rise in the past two weeks. Currently, 69 percent of registered Democrats have a favorable impression of Gore compared to 51 percent two weeks ago.

Despite his recent attacks on Gore, Bradley voters still cite his integrity as the top reason they support him. Twenty-one percent of Bradley supporters mention his honesty and integrity, 12 percent say they like his policy positions and 11 percent support Bradley because they don't like Gore.