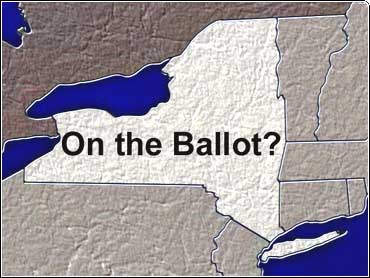 Arizona Senator John McCain's efforts to get on the New York presidential primary ballot are being challenged by supporters of fellow Republican George W. Bush.

McCain has filed insufficient petitions in more than half of the New York's 31 congressional districts in his attempt to qualify for the March 7 primary, Bush supporters asserted Tuesday.

Jeffrey Buley, a lawyer working at the direction of state GOP Chairman William Powers, said specific challenges would be filed to the Arizona senator's petitions in at least 16 of the state's 31 congressional districts, with additional challenges a possibility.

Should the challenges be successful, McCain could end up without convention delegate slates in more than half of the state.

The McCain camp indicated Tuesday it would fight the challenges within the Republican party and in federal court.

"I am a credible candidate," McCain said in New Hampshire Tuesday. "Everyone knows that I have a right to be on the ballot in New York."

McCain's New York campaign manager, Staten Island Borough President Guy Molinari, said, "We intend to defend our petitions ... and then we'll take them on in the streets."

Noting the Bush camp hadn't challenged publisher Steve Forbes' New York ballot petitions, Molinari said, "That says it all. They're afraid of McCain ... and they have good reason to be afraid of McCain."

Lee Daghlian, a spokesman for the state Board of Elections, said a hearing on the challenges to the McCain petitions would probably be held early next week. The board hopes to certify the New York primary ballot by Jan. 31, but court challenges could delay that.

In New York, GOP candidates must circulate petitions to qualify separate convention delegate slates in each of the state's 31 congressional districts in which they wish to compete. In effect, there are 31 separate GOP primaries in New York.

Molinari had previously conceded that McCain petitions would probably come up short on the required number of signatures in at least five of the 31 districts, and possibly in a sixth.

Bush and Forbes have both filed petitions they claim qualify them for the primary ballot in all 31 congressional districts. Their petitions have not been challenged.

McCain has also filed a federal lawsuit in an attempt to open up the ballot in New York. That lawsuit will be heard at the end of the month.

McCain has equated the petition challenges in New York against him to "Stalinist politics" and called on front-runner Bush to use his considerable influence in the state to get the challenges dropped.

Bush demurs on the matter, saying it's one for New York Republicans to decide.