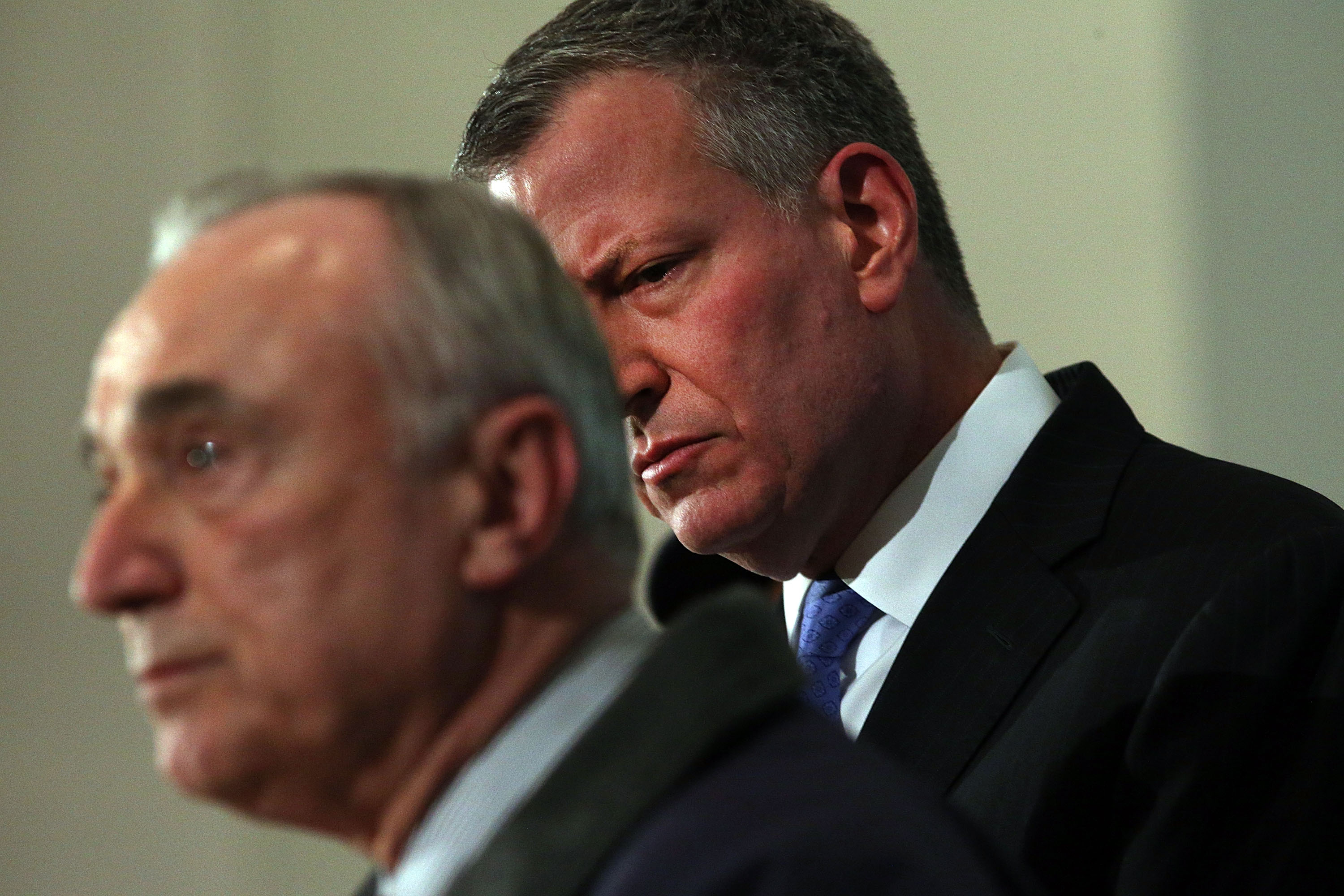 NEW YORK -- New York City's police commissioner concedes that Mayor Bill de Blasio has lost the confidence of some of the city's police officers in the wake of the murder of Officers Wenjian Liu and Raphael Ramos.

On Monday, de Blasio and Bratton met with the families of the two officers who were shot to death in their squad car this weekend. The mayor visited both officers' families at the hospital Saturday but did not see them Sunday.

Some police officers turned their backs on the mayor on Saturday as he walked through the hospital where the slain officers were taken. Commissioner William Bratton told NBC's "Today" show that he didn't think that was appropriate conduct by the officers.

Their union president recently suggested officers sign a petition telling the mayor not to attend their funerals if they died on duty. Patrick Lynch had said officers felt they were "thrown under the bus" by de Blasio after a Staten Island grand jury decided not to indict a white officer in the death of Eric Garner, who was black.

De Blasio had spoken then about teaching his own teenage son, who is half-black, to be careful around police.

While civil rights leaders condemned the ambush killings and expressed fear that backlash over the bloodshed could derail protest movements that grew out of the deaths of Garner and Michael Brown, Patrick Lynch, president of the Patrolman's Benevolent Association in New York, said there was "blood on the hands" of demonstrators and elected officials who have criticized police tactics.

Philadelphia Police Commissioner Charles Ramsey said Monday on "CBS This Morning" that the snipping may have gone too far.

"I think right now everyone should just focus on the families of the two slain officers, put them away with the dignity and the respect that they certainly deserve," Ramsey said. "The rest of this can be sorted out at a later time, but right now everyone needs to lower the volume a little bit on the rhetoric because we're just in a very, very volatile environment right now."

Big-city police departments and union leaders around the country are warning the rank and file to wear bulletproof vests and avoid making inflammatory posts on social media in the days after the deadly ambush.

The killings of Ramos and Liu on Saturday afternoon in Brooklyn heightened fears about the safety of law enforcement officials nationwide. The gunman, 28-year-old Ismaaiyl Brinsley, had vowed in an Instagram post to put "wings on pigs" as retaliation for the deaths of black men at the hands of white police.

Officials in New York investigated at least a dozen threats against police since the shootings, and one man was arrested at a Manhattan precinct after he walked in and said: "If I punch you in the face, how long would I go to jail?" and refused to leave.

Investigators are trying to determine if Brinsley had taken part in any protests over the deaths of Michael Brown and Eric Garner, whose names he invoked in his online threat, or simply latched onto the cause for the final act in a violent rampage.

The killings come at a tense time as police nationwide are being criticized following Garner's death in a New York officer's chokehold and Brown's fatal shooting in Ferguson, Missouri. Protests erupted in recent weeks after grand juries declined to charge the officers involved.

After the officers' killings, a union-generated message at the 35,000-officer NYPD warned officers that they should respond to every radio call with two cars - "no matter what the opinion of the patrol supervisor" - and not make arrests "unless absolutely necessary." The president of the detectives' union told members in a letter to work in threes when out on the street, wear bulletproof vests and keep aware of their surroundings.

Another directive warned officers in Newark, New Jersey, not to patrol alone and to avoid people looking for confrontations. At the same time, a memo from an NYPD chief asked officers to limit their comments "via all venues, including social media, to expressions of sorrow and condolence."

In Philadelphia, Ramsey urged the leaders of protests over the deaths of Garner and Brown to "call for calm and not let this escalate any further." In Boston, Police Commissioner William Evans said police issued an alert warning officers about the New York City killings and added that the department had issued several alerts following the Ferguson grand jury's decision.

At a news conference in New York on Sunday, Chief of Detectives Robert Boyce detailed Brinsley's long criminal record, hatred for police and the government and apparent history of mental instability that included an attempt to hang himself a year ago.

Brinsley had at least 19 arrests in Georgia and Ohio, spent two years in prison for gun possession and had a troubled childhood so violent that his mother was afraid of him, police said. He ranted online about authority figures and expressed "self-despair and anger at himself and where his life was," Boyce said.

Hours before shooting the officers, Brinsley had shot and wounded his ex-girlfriend, Shaneka Thompson, at her home in Baltimore.

"He shot me! I don't want to die. I don't want to die," Thompson screamed, according to neighbor Yevette Seay. She told The Associated Press she called 911 as Thompson lay on the floor, clutching her stomach. Authorities have said Thompson is expected to survive.

After leaving Baltimore, authorities said, Brinsley took a bus north to New York City and used Thompson's phone to write on Instagram: "They take 1 of ours, let's take 2 of theirs." He ended the post with references to the Brown and Garner cases.

Once in New York and shortly before he opened fire on the officers, Brinsley walked up to people on the street and asked them to follow him on Instagram, then told them, "Watch what I'm going to do," Boyce said. Then Brinsley approached the squad car and fired four shots, killing the policemen. He ran into the subway station and committed suicide.

The shootings also deepened acrimony between rank-and-file police and the mayor. Their union president recently suggested officers sign a petition telling the mayor not to attend their funerals if they died on duty, and some officers turned their backs on de Blasio Saturday as he walked through the hospital where Liu and Ramos had been taken.

One of Ramos' relatives said the family would welcome a visit from the mayor, who visited both officers' families at the hospital Saturday but did not see them Sunday.

"If he wants to come and show support, by all means, we'll accept that," said Ramos' cousin Ronnie Gonzalez.

Ramos' 13-year-old son, Jaden, said in a Facebook post that Saturday was the worst day of his life.

"Today I had to say bye to my father," Jaden wrote. "He was the best father I could ask for. It's horrible that someone gets shot dead just for being a police officer. Everyone says they hate cops but they are the people that they call for help."