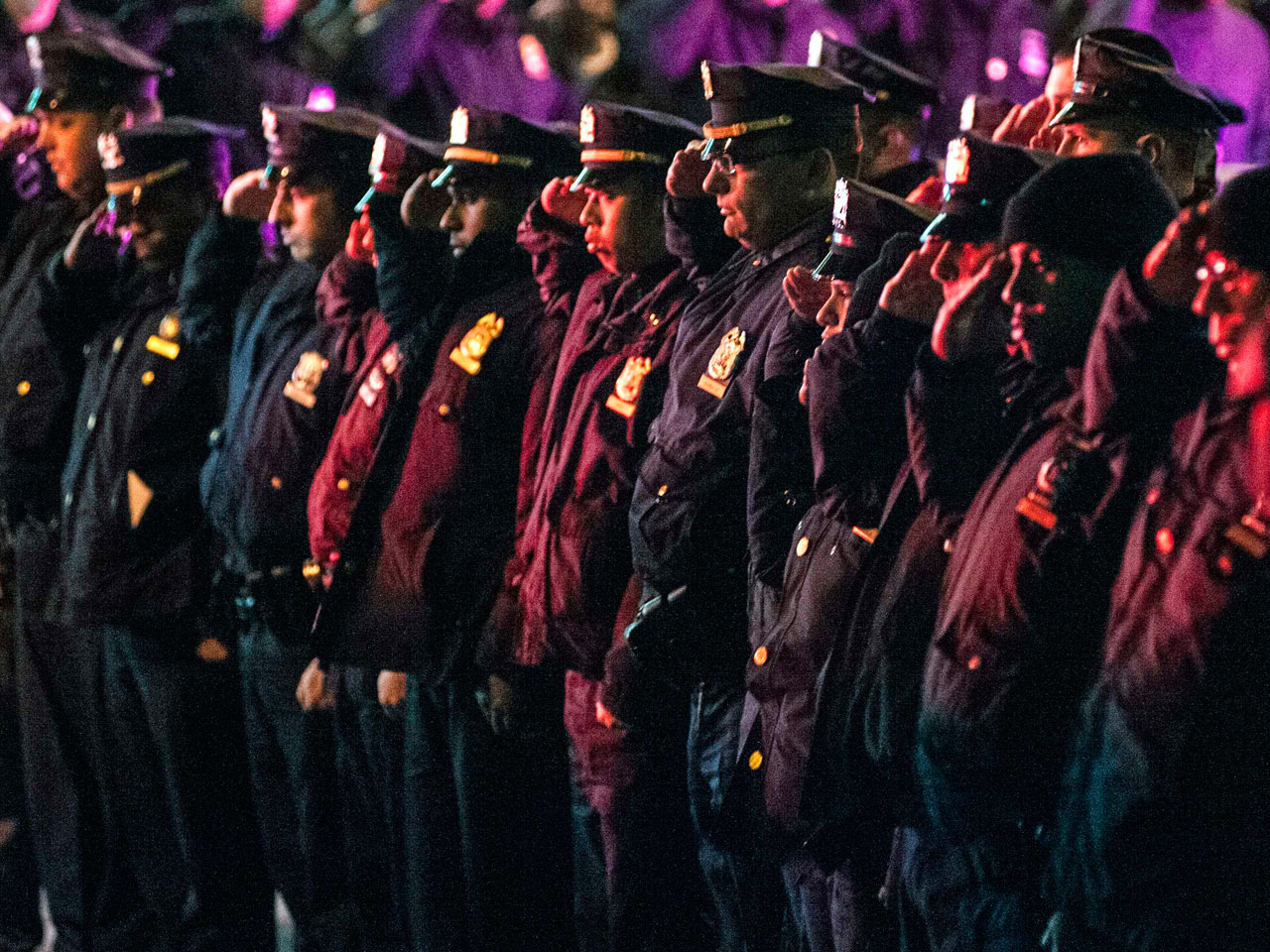 Tensions began rising between police officers nationwide and many in their communities this summer after the Michael Brown shooting in Ferguson, Missouri, sparked sometimes violent demonstrations nationwide.

The tensions grew after a grand jury declined to indict the officer in that case, as well as the officer in the case of Staten Island man Eric Garner, who died of a heart attack after being placed in a chokehold by a NYPD officer. Other deadly incidents between cops and unarmed offenders seemed to only deepen the divide between the sides, as the protests against police brutality continued to grow and spread.

While few probably could have imagined the tension would lead to the execution of two NYPD officers in their squad car, police in several cities are now on high alert, fearful of copycat attacks from an agitated public.

In New York, the NYPD confirmed to CBS News that all auxiliary patrols have been suspended for the time being. The two officers killed there, Officers Rafael Ramos and Wenjian Liu, were on special patrol doing crime reduction work in a Brooklyn neighborhood.

Investigators were trying to determine if the killer really had a deep sympathy for the protests or simply latched on to the cause for the final act of a violent spree. The gunman, who ended up killing himself, had vowed online to put "wings on pigs" after shooting his girlfriend in suburban Baltimore.

The siege mentality was evident in several memos circulating among the rank and file at the 35,000-officer New York Police Department, the nation's largest.

A union-generated message warned police officers they should respond to every radio call with two cars - "no matter what the opinion of the patrol supervisor" - and to not make arrests "unless absolutely necessary." The president of the detectives' union told members in a letter to work in threes when out on the street, wear bulletproof vests and keep aware of their surroundings.

"Cowards such as yesterday's killer strike when you are distracted and vulnerable," the letter read.

In Baltimore, where NYPD shooting suspect Ismaaiyl Brinsley shot his girlfriend before heading to New York, Gene Ryan, the head of the city's police union, warned Sunday that the incident is part of a "national crisis."

"Poor leadership and lack of support in law enforcement has created a vacuum, in which lawless can grow," said Ryan, adding that the situation is a "powder keg nationwide."

In Massachusetts, Boston police brass issued a warning to all officers Saturday night to be on high alert, reports the Boston Herald.

"Almost ever since Ferguson we stepped up to make sure officers are aware. ... What happened in New York should never happen," Boston police Commissioner William B. Evans said hours after the double murder, according to the Herald.

New Jersey State PBA Executive Vice President Marc Kovar said in the email that all members and officers should take extra caution and change up routines in the coming weeks, citing heightened hostility from nationwide protests that he says has led to a "fever pitch of anti-police sentiment."

"This open hostility has created more tense encounters with officers even on routine incidents such as motor vehicle stops," Kovar said. "The State PBA is advising officers to be alert for any interaction where a person may be looking for a confrontation."

Police said Brinsley approached the passenger window of a marked police car and opened fire, striking Officers Rafael Ramos and Wenjian Liu in the head. Brinsley was black; the officers were Asian and Hispanic, police said.

In Newark, Police Director Eugene Venable said that no single officer units will patrol the city's streets in the wake of the shootings.

But Kovar said officers need to be vigilant for potential ambushes and should "remain vigilant and avoid complacency."

He also suggests that officers change up routines, including meal breaks, and wait for backup for any calls that appear "out of the ordinary."