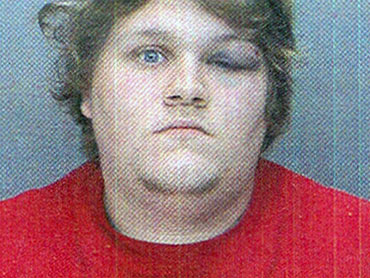 PHILADELPHIA (AP) What Philadelphia Phillies fan Matthews Clemmens did was enough to make himself sick - and us, too, for that matter - but at least now he admits it.

The 21-year-old Cherry Hill, N.J. man has pleaded guilty to intentionally vomiting on a man -- a police officer -- and his 11-year-old daughter, in the stands at the Phillies-Nationals game April 14.

Clemmens pleaded guilty to simple assault and other charges Tuesday, May 25.

Police say the nauseating fan stuck his fingers down his throat and vomited on Easton, Pa. police Captain Michael Vangelo and his daughter, after Clemmens' companion was ejected from the park.

Sentencing is set for July 30.  Assistant District Attorney Patrick Doyle says guidelines call for Clemmens to get probation. He says Capt. Vangelo's family is satisfied with the plea.

Crimesider is offering to buy "vomit man" a satellite dish to discourage him from going to any more games.