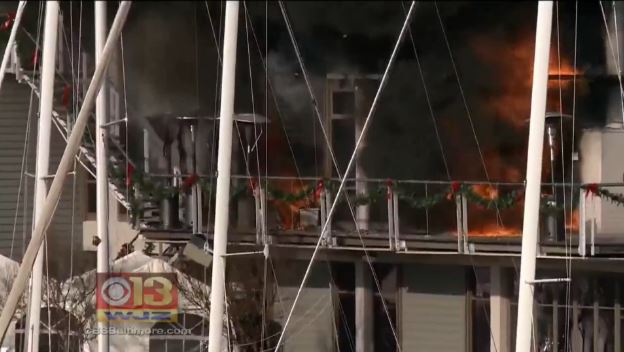 BALTIMORE -A massive fire rips through an historic yacht club in Annapolis as hundreds of visitors were in town for the holiday festivities.

The fast-moving fire turns the scenic-waterfront into an inferno.

The call came in at 2:15 p.m. Saturday, when the fire alarm went off in the main club house on Compromise Street.

Traffic in the surrounding area cripples when roads close into downtown Annapolis.

The fire even forces the mayor to cancel the annual Parade of Lights.

"So the safety issue was with fire coming off the building landing in the water. We want to make sure that none of the other boats passing by would have fire come on them," said Annapolis Mayor Mike Pantelides.

About 90 firefighters from the city, Anne Arundel County and U.S. Naval Academy spent hours putting out hotpots. Three fire boats also had to be brought in to supply water.

You can get a sense of how ruthless this fire was by looking at the clubhouse staircase. The hand rails and steps are charred, but it's still too early to say how much damage this fire caused.

According to a yacht club notice, the building was closed to members while preparing for the parade.

One firefighter suffered minor injuries during the incident and was taken to a local hospital.

"I'm not happy, but you know we're here. So we might as well make a night out of it and keep enjoying what's left of what supposed to be the event," said Cinthya Astudillo.

It is still unclear if the parade will be rescheduled. The yacht club will be closed until further notice.