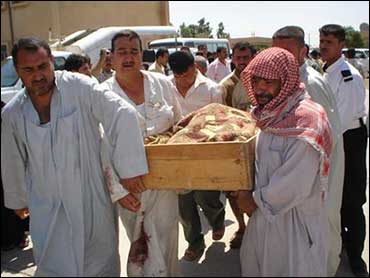 Masked gunmen stopped two minivans carrying students north of Baghdad Sunday, ordered the passengers off, separated Shiites from Sunni Arabs, and killed the 21 Shiites "in the name of Islam," a witness said.

The two attacks dealt a blow to Iraqi Prime Minister Nouri al-Maliki's pledge to curb sectarian violence. He again failed to reach consensus Sunday among Iraq's ethnic and sectarian parties on candidates for interior and defense minister — posts he must fill to implement his ambitious plan to take control of Iraq's security from U.S.-led forces within 18 months.

Violence linked to Shiite and Sunni Arab animosity has grown increasingly worse since Feb. 22, when bombs ravaged the golden dome of a revered Shiite mosque in predominantly Sunni Arab Samarra.

In the minibus ambush, a car and an SUV stopped the vehicles near the town of Qara Tappah, about 75 miles northeast of Baghdad and near Diyala province, electrician Haqi Ismail, 48, told The Associated Press.

Ismail said he had been driving his pickup truck behind the vans and was stopped too. About 15 masked men wearing traditional robes known as a dishdashas forced everyone out of the vehicles, he said.

"They asked us to show our IDs, and then instructed us to stand in a line, separating the Sunni from the Shiite due to the IDs and also due to the faces," said Ismail, a Shiite Kurd.

He said the gunmen ordered the Shiites to lie down and before they opened fire one shouted, "On behalf of Islam, today we will dig a mass grave for you. You are traitors."

Ismail said he was injured but did not move.

"One of the gunmen kicked me to be sure that I was dead," he said, speaking from his hospital bed in Sulaimaniyah, north of Qara Tappah.

Two of the victims were high school students, ages 17 and 18, and nine were students at al-Yarmouk University in Baqouba, ages 21-22, said Qara Tappah's mayor, Serwan Shokir. The rest were men in their mid-to-late 30s, who worked as laborers or for the power company, the mayor said.

The Basra violence — the car bomb Saturday and mosque raid early Sunday — came days after al-Maliki declared a state of emergency in the city, vowing to crack down with an "iron fist" on gangs fighting for power.

Basra police surrounded the al-Arab mosque just after midnight Saturday, tipped off that militants holed up inside had opened fire. Also, Iraqi forces had found two vehicles packed with explosives near the mosque, similar to the car bomb used to attack a crowded market, killing 28 people and wounding 62.

A hard-line Sunni organization in Basra, the influential Sunni Arab Association of Muslim Scholars, said the nine people killed had come to the mosque to protect it.

Parliament was postponed Sunday after al-Maliki again failed to find agreement on who should run Iraq's security forces. The Shiite prime minister had promised to present candidates for the defense and interior posts, as well as minister of state for national security, on Sunday for approval by the 275-member parliament.

The political parties decided "to give the prime minister another chance to have more negotiations," said Deputy Parliament Speaker Khalid al-Atiya, a Shiite.

In Washington, Secretary of State Condoleezza Rice expressed confidence that Iraqi leaders would agree on candidates in the next few days.

"Of course, they need to get this settled, but they will get it settled. I really do believe that they'll get it settled in the next few days. But the important thing here is that they get it right," she told Fox News on Sunday.

The Interior Ministry will go to a Shiite, the Defense to a Sunni Arab, in an effort to provide balance on security matters. Much of the problems focused on Shiite objections to some Sunni Arab candidates for the defense ministry because they served in the military under ousted President Saddam Hussein.

"The names which were presented for the Defense Ministry were all rejected because some of them are famous military officers during the Saddam era," said Haider al-Ebadi, a Shiite legislator and senior official from al-Maliki's Dawa party.

There also was dissent in Shiite ranks over the interior ministry.