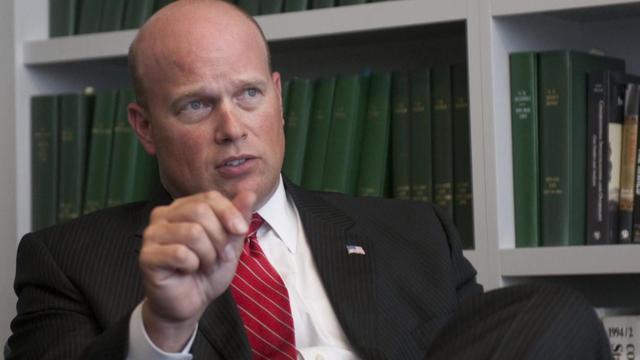 Maryland Attorney General Brian Frosh filed a motion challenging the appointment of Acting Attorney General Matthew Whitaker in an existing lawsuit over the Affordable Care Act (ACA). Frosh, a Democrat, is seeking a preliminary injunction to prevent the federal government from responding to the suit while Whitaker is acting attorney general, and called on Deputy Attorney General Rod Rosenstein to replace him.

Frosh filed suit against the Trump administration in September for failing to defend the ACA in a federal case brought by Texas alleging the law is no longer constitutional. The Supreme Court upheld the constitutionality of the ACA in 2012. In a statement in September, Frosh said, "we cannot allow President Trump and Attorney General Sessions to destroy the ACA."

Former Attorney General Jeff Sessions was a defendant in the lawsuit. He was forced to resign last week, and Mr. Trump replaced him with Whitaker, Sessions' former chief of staff.

In the motion filed Tuesday, Frosh argued that Whitaker could not be the case's new defendant, as his appointment was illegal and unconstitutional.

"The very point of the Attorney General Succession Act is to ensure that the Nation's highest law enforcement official is a Senate-confirmed officer within the chain of command of the Department of Justice—one whom the Senate has already considered with the possibility of such performance of the Attorney General's functions in mind— and to forbid the President from appointing a hand-picked employee to that role," Frosh wrote in the motion.

Frosh also argued Whitaker's appointment was politically motivated, as the new acting attorney general has expressed skepticism about the special counsel's investigation into Russian meddling in the 2016 election, which Mr. Trump has repeatedly called a "witch hunt." Whitaker has also criticized the ACA.

"The Constitution and Congress have established vitally important processes for filling high-level vacancies in the federal government," Frosh said in a statement. "Few positions are more critical than that of U.S. Attorney General, an office that wields enormous enforcement power and authority over the lives of all Americans.  President Trump's brazen attempt to flout the law and Constitution in bypassing Deputy U.S. Attorney General Rosenstein in favor of a partisan and unqualified staffer cannot stand."