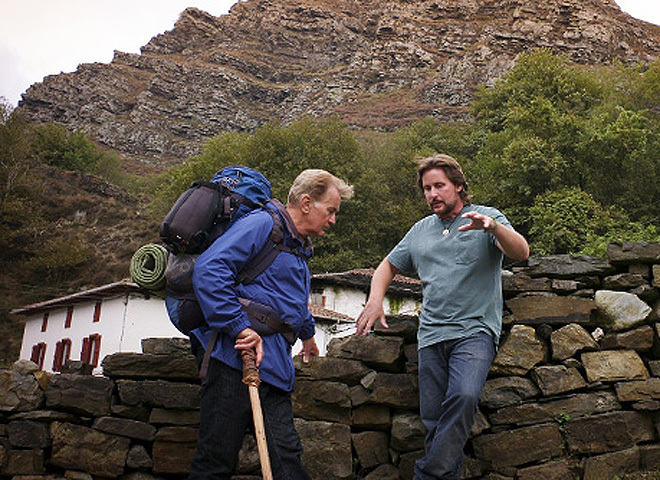 Maybe you know Martin Sheen best from his days in the Oval Office, playing the president of the United States in the hit TV show "The West Wing." Or do think of him as actor Charlie Sheen's dad? He - and his OTHER son, Emilio Estevez - sat down with Mo Rocca for our Sunday Profile...

Okay, let's get this out of the way -

"Over the past year," Rocca asked Martin Sheen, "how was it as a father to watch your son Charlie go through what he went through publicly?"

"Are you a father?" Martin asked.

Family is at the very heart of actor Martin Sheen. And the very public problems of his son Charlie - well, that's the elephant in the room.

"What kind of support were you able to offer?" Rocca asked.

"I'd never, ever, ever allowed my heart not to include all of my children all of the time," he said. "You love them differently, and you give the most love to the one that needs it at the time. And that's certainly the case with Charlie. I adore him, and he's the biggest supporter of this film."

The film Martin's talking about is the one he made with his oldest son, Emilio Estevez, about a father - and the son he loses.

The film is "The Way," written and directed by Emilio. It's the story of a father's spiritual journey along the Camino de Santiago in France and Spain, spreading his son's ashes along the ancient 500-mile pilgrimage.

Sheen said they had difficulty getting the financing for the film. "Yeah, trying to find a partner for a walk across the north of Spain where there's no car chases or violence or sexuality or language or degradation ... no giant robots!"

But Emilio - who had directed his father twice before - had only one actor in mind for the part.

"I wanted to write something for him that was about who he is, as a man, as an actor," Estevez said. "This guy with this enormous heart."

"You know, it was the best part I've had in 30 years, frankly. First time in an equal number of years that I've been asked to carry a film. And so I had some trepidation about, you know, living up to his expectation."

"We asked him to do things like, you know, climb over the Pyrenees at 4,000 feet, and jump into a river," explained Estevez. "There's this one sequence in the film where a gypsy boy steals his backpack and he's chasing him through the streets.

They say the film is about getting back to basics and embracing one's brokenness.

Estevez said, "In a culture that is bombarding us every day with messages of, you know, take this pill and you'll be happier and have your teeth whitened and people will love you more and go on this diet and you'll be thinner and all of these things that basically are saying 'You're not good enough,' how about a message that 'You're a wonderful mess!'? 'You're a gorgeous human being! Embrace it!' Do you know what I mean?"

"Is this whole thing an intervention?' Rocca asked.

The father and son, who live just 200 yards apart in Malibu, are obviously close. But they didn't always get along so well.

"Something about the Philippines and a movie called 'Apocalypse Now,'" Rocca offered.

"Ah, wonderful movie!" Martin said to Emilio. "You have to see that again. I was really good!"

"Yeah, I heard you were pretty good in that!" Emilio said. "

It wasn't that funny at the time. Martin had brought his wife and four children to the Philippines during the filming of "Apocalypse Now." Emilio was 14, and wanted to go home.

Father and son came to blows.

"You guys would get into a lot of fights or not?" Rocca asked.

Martin ... drinking heavily then ... was battling his own demons, even admitting to psychotic episodes.

Some are on film, in the movie's opening sequence. The moment was documented in the film "Hearts of Darkness," about the making of "Apocalypse Now."

"Were you really plastered during that scene?" Sheen was asked.

He had a heart attack during filming, and was given last rites.

Eventually, he began the road back to sobriety and spirituality that led him to the door of a Catholic Church.

"I banged on the door and no answer. And I banged again. No answer," said Sheen. "Then the third time, I hammered on the door and the door flew open. And there was this man standing there. 'And what's this riot going on here?' And I said, 'Father, I've been gone from the faith for a very long time and I want to come back.'"

Martin Sheen was born Ramon Estevez in Dayton, Ohio to a father from Spain and a mother from Ireland.

He moved to New York to pursue acting, adopting a new name to avoid ethnic prejudice.

He says he regrets changing his name, "very much so. Yeah. Big mistake."

"How did your father feel about you changing your name?" Rocca asked.

"Very disappointed. But I never changed my name officially."

He made a name for himself as the returning soldier in the play and film, "The Subject Was Roses."

Then, as the serial killer in "Badlands." "God, that movie makes me tense," Rocca said.

Though he's made some 65 films, these days he's perhaps best known for his award-winning run as the liberal President Josiah Bartlet on Aaron Sorkin's "The West Wing."

"I loved that he made me a Notre Dame grad, and that he gave me a prize for economics. I can't even balance a checkbook, you know?" Sheen said.

"I don't have any politics," he replied. "I don't really have any interest in politics. It's social justice, really, that interests me."

He's been arrested 67 times ... protesting for such causes as opposition to nuclear weapons, and support for United Farm Workers.

He's also anti-abortion. "Yeah, I have children, you know? The only regret I have about having had four children is I didn't have four more. But who knew? 'Cause that's how you know yourself, you know - through your children."

Martin is 71 now. He and his wife about to celebrate their 50th wedding anniversary.

In the vineyard behind Estevez's home, Martin and Emilio reap the rewards of family.

"Is this the happiest he's ever been?" Rocca asked Estevez.

"It's the nuttiest I've ever been as well, but the happiest I would say!" Sheen laughed.