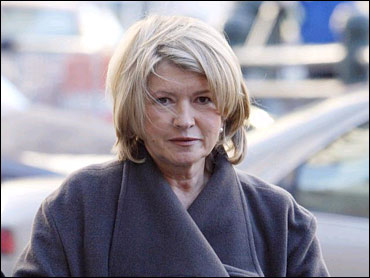 The credibility of an FBI special agent, whose notes are the only government record of Martha Stewart's two interviews with investigators in 2002, was attacked by defense lawyers during trial testimony.

The attack came as the 10th day of testimony got under way at the trial of Stewart and ex-stockbroker Peter Bacanovic.

They are accused of lying to investigators about why Stewart sold 3,928 shares of ImClone on Dec. 27, 2001.

The pair claim they had a pre-existing understanding to sell the stock when it fell to $60 per share. But the government says Stewart was tipped that ImClone CEO Sam Waksal was trying to dump his own shares.

One of the charges against Stewart is that she lied when she said in one interview that she did not recall whether her office kept a log of a message left by Bacanovic on the day of the stock sale.

Stewart's assistant has testified Stewart personally altered the log of the Bacanovic message, then ordered that it be restored.

"Is this incident proof that Stewart had a guilty mind and something to hide, as prosecutors no doubt will claim during closing arguments? Or is it proof that Stewart wasn't sure how to handle the growing problem -- a sign of confusion, perhaps, but certainly not a crime. A guilty person would delete the e-mail, this argument goes, an innocent person would order it restored," says CBSNews.com Legal Analyst Andrew Cohen.

FBI special agent Catherine Farmer testified she had no notes of Stewart specifically saying she did not remember such a log. Farmer apparently wrote only in a report she prepared after the interview that Stewart said she could not recall.

"And you were the only person taking notes for the United States government that day, right?" Stewart lawyer John Tigue asked.

CBS News Correspondent Sharyn Alfonsi reports Farmer admitted that she did not tape record any of her interviews with Stewart and that the only record is the agent's notes — Notes where she didn't write down a single question and only partial answers.

Defense attorneys pointed out that those notes are riddled with mistakes and that Stewart may not have lied to agents, she may have, in a sense, been misquoted.

Farmer took notes on the two meetings, then typed routine summaries of them, called FBI 302 reports, based on her notes and memory.

In Stewart's interview on Feb. 4, 2002, Farmer's 302 report shows Stewart claimed she did not know whether there was a record at her office of a call from Bacanovic on the day she sold her ImClone stock.

But under questioning from Stewart lawyer John Tigue, Farmer conceded the information in the 302 report — written immediately after the interview — came from her memory only and did not appear in her notes.

"It's possible to miss important things, and you were brand new to the case, weren't you?" Tigue asked.

"Was Martha Stewart treated any differently than anyone else who submits to a voluntary interview?" Seymour asked Farmer.

"No," the agent replied.

Meanwhile, the federal judge in the case dealt a blow to the prosecution by denying their request to introduce expert testimony relating to securities fraud, the most serious charge against the domestic diva.

The testimony barred by U.S. District Judge Miriam Goldman Cedarbaum would have discussed how investors might have reacted to Stewart's public statements about her ImClone Systems sale.

The securities fraud count accuses Stewart of propping up the stock price of her own company, Martha Stewart Living Omnimedia, by claiming in 2002 that her ImClone sale was proper and that she was cooperating with authorities.

Conviction on the securities fraud count would carry a 10-year prison term. Each of the other four counts against Stewart would carry five years.

Cedarbaum's ruling granted a motion by Stewart over statements she made in 2002, blocking testimony on "whether a reasonable investor would have considered the statements important in making an investment decision," the judge said.