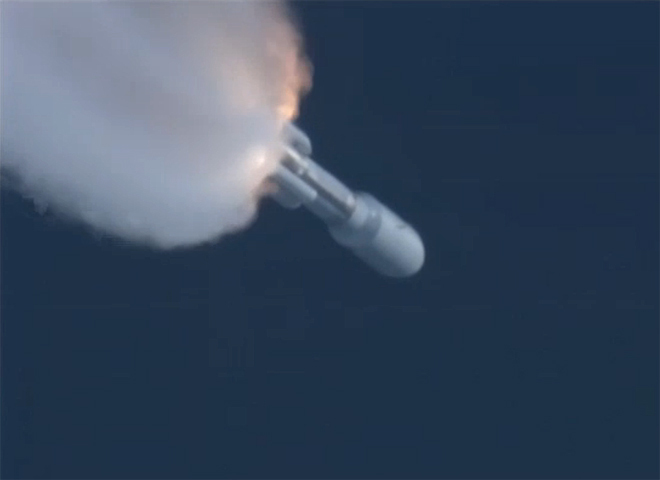 CAPE CANAVERAL, Fla. - The world's biggest extraterrestrial explorer, NASA's Curiosity rover, rocketed toward Mars on Saturday on a search for evidence that the red planet might once have been home to itsy-bitsy life.

It will take 8½ months for Curiosity to reach Mars following a journey of 354 million miles.

An unmanned Atlas V rocket hoisted the rover, officially known as Mars Science Laboratory, into a cloudy late morning sky. A Mars frenzy gripped the launch site, with more than 13,000 guests jamming the space center for NASA's first launch to Earth's next-door neighbor in four years, and the first send-off of a Martian rover in eight years.

NASA astrobiologist Pan Conrad, whose carbon compound-seeking instrument is on the rover, had a shirt custom made for the occasion. Her bright blue, short-sleeve blouse was emblazoned with rockets, planets and the words, "Next stop Mars!"

The 1-ton Curiosity — as large as a car — is a mobile, nuclear-powered laboratory holding 10 science instruments that will sample Martian soil and rocks, and analyze them right on the spot. There's a drill as well as a stone-zapping laser machine.

It's "really a rover on steroids," said NASA's Colleen Hartman, assistant associate administrator for science. "It's an order of magnitude more capable than anything we have ever launched to any planet in the solar system."

The primary goal of the $2.5 billion mission is to see whether cold, dry, barren Mars might have been hospitable for microbial life once upon a time — or might even still be conducive to life now. No actual life detectors are on board; rather, the instruments will hunt for organic compounds.

Curiosity's 7-foot arm has a jackhammer on the end to drill into the Martian red rock, and the 7-foot mast on the rover is topped with high-definition and laser cameras. No previous Martian rover has been so sophisticated or capable.

With Mars the ultimate goal for astronauts, NASA also will use Curiosity to measure radiation at the red planet. The rover also has a weather station on board that will provide temperature, wind and humidity readings; a computer software app with daily weather updates is planned.

The world has launched more than three dozen missions to the ever-alluring Mars, most like Earth than the other solar-system planets. Yet fewer than half of those quests have succeeded.

Just two weeks ago, a Russian spacecraft ended up stuck in orbit around Earth, rather than en route to the Martian moon Phobos.

"Mars really is the Bermuda Triangle of the solar system," Hartman said. "It's the death planet, and the United States of America is the only nation in the world that has ever landed and driven robotic explorers on the surface of Mars, and now we're set to do it again."

Curiosity's arrival next August will be particularly hair-raising.

In a spacecraft first, the rover will be lowered onto the Martian surface via a jet pack and tether system similar to the sky cranes used to lower heavy equipment into remote areas on Earth.

Curiosity is too heavy to use air bags like its much smaller predecessors, Spirit and Opportunity, did in 2004. Besides, this new way should provide for a more accurate landing.

Astronauts will need to make similarly precise landings on Mars one day.

Curiosity will spend a minimum of two years roaming around Gale Crater, chosen as the landing site because it's rich in minerals. Scientists said if there is any place on Mars that might have been ripe for life, it would be there.

"I like to say it's extraterrestrial real estate appraisal," Conrad said with a chuckle earlier in the week.

The rover — 10 feet long and 9 feet wide — should be able to go farther and work harder than any previous Mars explorer because of its power source: 10.6 pounds of radioactive plutonium. The nuclear generator was encased in several protective layers in case of a launch accident.

NASA expects to put at least 12 miles on the odometer, once the rover sets down on the Martian surface.

This is the third astronomical mission to be launched from Cape Canaveral by NASA since the retirement of the venerable space shuttle fleet this summer. The Juno probe is en route to Jupiter, and twin spacecraft named Grail will arrive at Earth's moon on New Year's Eve and Day.

NASA hail this as the year of the solar system.