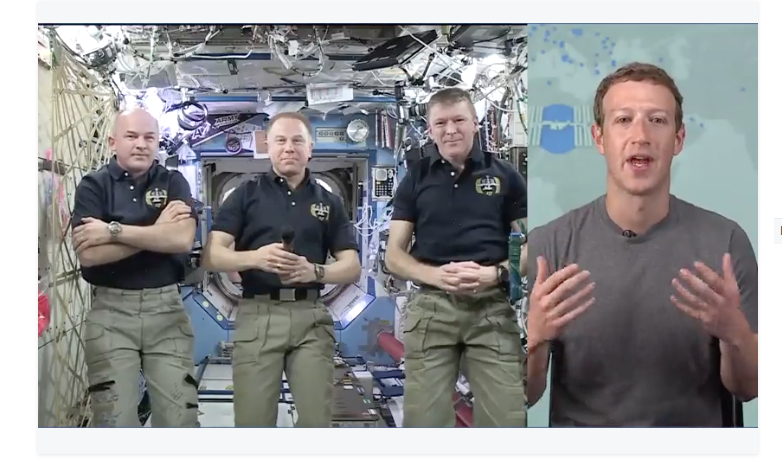 On Wednesday, Mark Zuckerberg went were no social media CEO has gone before when he conducted a Facebook Live video interview with three astronauts aboard the International Space Station -- the first Facebook Live broadcast from space. The video stream ran nearly 20 minutes and covered everything from how the astronauts stay healthy, to the experiments they perform on the station, to what they do for fun when floating in zero gravity.

Zuckerberg -- stuck on Earth at Facebook's California headquarters -- incorporated real-time user questions along with his own in the wide-ranging conversation with astronauts Tim Kopra, Tim Peake, and Jeff Williams.

"One of the main things we do is try to understand the impacts of zero gravity on the human body -- a lot of negative impacts. In large measure, we're an experiment," Kopra told Zuckerberg when summing up some of the main goals of the astronauts' out-of-this-world mission. "We exercise a couple hours every day, it's mitigation for loss of bone density and muscle mass."

Kopra also said that the astronauts perform eye tests to understand the impacts that zero gravity can have on vision. The goal is to see how humans could eventually withstand long periods living up in space -- making way for potential future Mars expeditions.

During the conversation, the microphone being used kept floating between the three crew members, prompting Zuckerberg to, not-so-subtly, plug Facebook's virtual reality efforts, saying that the sight wasn't something he was used to seeing "even in our virtual reality lab."

At one point the astronauts humored the Facebook CEO by flipping upside down, performing a weightless summersault.

For the astronauts, being in orbit and looking down on the Earth has been a life-changing experience. Peake, in particular, said that he is continually floored by the beautiful sight of the blue planet from space.

"I can't put into words how beautiful the planet is from up here. The privilege of seeing the planet change in the nearly six months we've been up here, the northern hemisphere changing winter to summer, thunderstorms, the aurora -- absolutely incredible," he said. "All of those kinds of elements, training can't prepare you for."

Other questions centered on life on the space station. One user wanted to know if food tasted different in space. Williams said that taste does change somewhat, due to physiological shifts brought on by zero gravity. He said "maybe our tastes are attenuated a little bit" in space, and that he and the other astronauts like to "have spicier food up here," given that the food "can taste a little bland."

One second-grade teacher wrote that her students wanted to know how the International Space Station crew -- hailing from different countries and speaking different languages -- can understand one another.

Kopra joked that Peake "speaks British" while he and Williams "speak American," before saying that everyone on board speaks English and Russian to varying degrees. He said that when touching base with his Russian counterparts, Kopra finds himself speaking "Rushlish," a mixture of the two languages.

So, what do astronauts do for fun? Williams said that "no one gets tired of viewing Earth form up here."

Zuckerberg, ever the techie, was curious about what the astronauts' favorite piece of technology was from the station.

Peake said that the Russian Soyuz rocket that blasts the astronauts up to the station -- a system that has remained virtually unchanged since the 1960s -- never ceases to impress. That being said, he added that the station itself is constantly being updated with cutting-edge technology. For instance, virtual reality is finding its place in space. It's being used for 3D mapping and to view the station itself in new ways.

"That really has got a large potential for future generations on board," Peake added.

One user wanted to know what advice the astronauts would have for aspiring explorers.

"That's a question we get asked a lot," Peake said. "Anyone aspiring to become astronauts or explorers or in the space industry, enjoy something that is what you tend to be best at, passionate about."