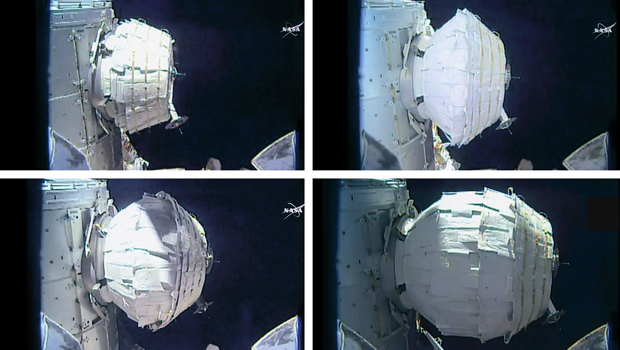 In any case, the Bigelow Expandable Activity Module, or BEAM, responded more normally Saturday, slowly expanding and filling out inch by inch as Williams remotely operated a valve to release bursts of air into the interior.

Once it had extended about 67 inches in length at 4:10 p.m. EDT (GMT-4), more air was pumped in to fully pressurize the compartment, kicking off a two-year test to determine how such "soft" modules, made with a reinforced fabric hull, maintain pressure, shield against space radiation and handle extreme temperature swings.

Based on designs initially developed by NASA in the 1990s, BEAM is a small test version of much larger expandable modules Bigelow hopes eventually will be used by NASA, other governments and space entrepreneurs to form the cores of next-generation space stations or to serve as habitats for long-duration voyages to Mars and other deep space targets.

Expandable modules take up much less room atop a launch vehicle than traditional full-size, solid-hull habitats and allow much roomier, lighter-weight modules to be launched than could otherwise be accommodated atop current rockets.

The BEAM module will remain closed during most of its stay attached to the space station, visited periodically by the lab crew to collect data from multiple sensors measuring space radiation, temperatures, pressure and structural stresses and strains. The compartment is not equipped with lights, communications gear or life-support systems.

At the end of the two-year test period, the BEAM will be detached using the station's robot arm and left to fall back into the atmosphere, burning up in the process.

If all goes well, Bigelow, working with rocket-builder United Launch Alliance, hopes to launch a much larger, 12,000-cubic-foot inflatable module by 2020 that also could, in theory, be attached to the space station.