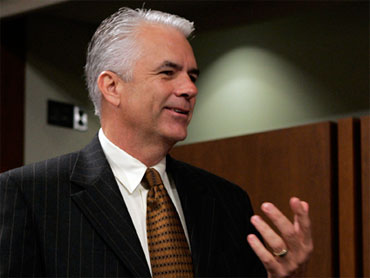 Two GOP leaders in Nevada are calling on embattled Sen. John Ensign to resign because of the ongoing ethics investigations surrounding him.

"We are on the verge of great victory come November, but the most long awaited victory can quickly slip through our grasp unless we immediately put the focus back on conservative issues," two former GOP officials from Clark County, which includes Las Vegas, wrote at Nevada News and Views. "We call on all true conservative Republican leaders and activists to speak out now for the resignation of Senator Ensign."

The controversy first started when Ensign acknowledged last June that he had an affair with one of his campaign staffers, Cynthia Hampton. Since then, the senator has come under scrutiny for possibly violating congressional rules by helping Hampton's husband find work as a lobbyist. On top of that, Ensign's parents gave the Hamptons a payment of $96,000 that they described as a gift. The FBI and the Senate Ethics Committee are investigating those matters.

A number of subpoenas have been issued to Republican groups and Nevada businesses connected to Ensign.

The investigations "have indisputably impaired Ensign's ability to do his job effectively and this will negatively impact good Republican candidates who are running in the upcoming elections," Scotti and Nigam wrote. Ensign has not been a strong presence in Nevada politics and has been an ineffective fundraiser, they said; however, they added that his poor leadership does not stem from the ethics investigations.

"Even during the good times - pre-Obama, Senator Ensign did not raise any money for the party," Scotti and Nigam wrote. "He was mediocre at best as the Chair of the Republican Senatorial Committee as he was distracted by his wife's best friend."

Ensign's congressional colleague Rep. Dean Heller (R-Nev.) is also asking the senator to be more forthcoming about the ethics investigations, the Hill reports. While Heller would not call for Ensign's resignation, he said on the television show "Nevada Newsmakers" that Ensign's situation is a "cause for concern."

"Will it have impact up and down the ticket for Republicans this fall?" he said. "I think there is a potential of that happening."