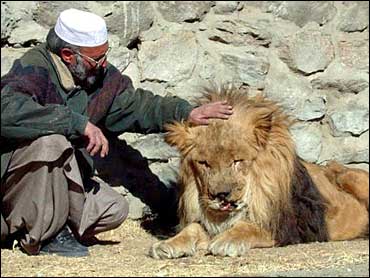 Marjan the one-eyed lion, the most famous of the war-battered beasts at the Kabul Zoo, has died just as international help had begun pouring in to ease the animals' plight, an official leading the aid efforts said Saturday.

Marjan, believed to be around 25, probably died of kidney and liver failure connected to old age, said John Walsh, international projects director of the World Society for the Protection of Animals.

The lion had a hard life. In the 1990s, an Afghan guerrilla showing off for his friends jumped over the guardrail into Marjan's den, and the lion killed him. The next day, the dead man's vengeful brother threw a grenade into the cage, and the explosion took out Marjan's eye.

Last week, representatives of the WSPA toured the zoo to assess the most urgent needs in a rehabilitation effort the group is coordinating. It had planned to put a ramp from Marjan's cage to his den because he had so much trouble getting around.

Walsh called Marjan a symbol of Afghanistan's travails and spirit.

“Even though blind, he was a tough, brave old guy,” Walsh said.

“I consider myself a pretty rough guy, but I cried” when he found Marjan dead Saturday morning, Walsh said.

With Afghanistan torn by successive conflicts, the zoo had been in desperate straits for years even before the Taliban took power. After the Islamic militia fled, though, the miserable conditions at the zoo were widely reported.

Fund-raising efforts for its rescue began in many countries. Zoos around the world have raised about $400,000 for the construction of a new zoo.

Walsh said the Afghan government was discussing whether to have a remembrance ceremony for Marjan and he suggested a campaign be started to build a statue to the lion.

: © MMII The Associated Press. All Rights Reserved. This material may not be published, broadcast, rewritten, or redistributed