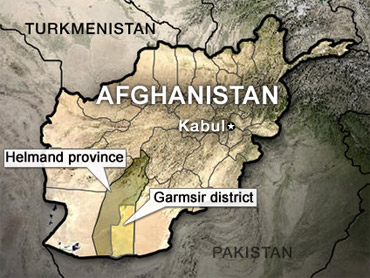 The Marine CH 53 helicopter came in from the desert and landed in the middle of an opium poppy field, which was literally adjacent to the Marine base. The poppy harvest is just over, and the poppies we crunched through on our way into the base were brown and brittle - their pods scored with diagonal slashes from the farmers who passed through last week, collecting the resin.

Forward Operating Base Karma is the southernmost base for 3/1 battalion in Garmsir disrtict, and it is the base that has seen the most action recently.

Go 200 yards south of the base, and the Taliban start shooting. Last week the base itself was attacked, during a dust storm. The Taliban know that the sophisticated American night vision equipment and the overhead surveillance from drones doesn't function well in sandstorms, and they crept up on the base and started firing from a treeline barely 60 yards away. The base is in a fairly robust building which is inside a walled compound, and once the shooting started the Marines responded with some pretty heavy return fire, beating back the Taliban.

When the sun came up some Marines pushed south and got into a series of firefights that lasted all day - reinforcements were brought in from further north on Thursday night, and today they pushed the Taliban back about five miles from the base. On the way they found, by chance, an IED factory - a house where the Taliban had been making IEDs to plant in the roads, complete with pressure plates, explosives, wires and the jugs they use to hold the explosives. The Marines blew the entire building up.

By this afternoon most of the fighting was over - we heard a few explosions that were controlled detonations, otherwise the countryside was quiet. At dusk from the roof of the base we watched a herd of sheep move into the poppy field outside the wall, chewing on the poppy stalks. A young boy was herding them, swallows dipped and soared overhead, and it was hard to believe anything could disturb such a peaceful scene.