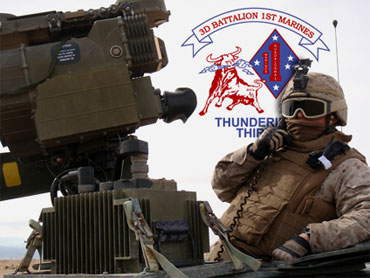 We drove south today from the main 3/1 base to Koshtay where Lima company is based.

But because of the IED threat, we took quite a roundabout route.

Garmsir district is shaped, they like to say, like a snake - there is a broad head at the top and then it is a long narrow body tapering down in the direction of the Pakistan border, following the Helmand river.

Most of Helmand province is dry, barren desert, but this one strip along the river is magically green - a band of fertile land a few miles across. Seen from a helicopter it is like a green rent in an otherwise uniformly red landscape. Seen from the ground it is fertile agricultural land, criss-crossed with canals that - ironically - were built by American aid workers back in the 1950's and 60's. They call it the "Green Zone."

Wheat, corn, vegetables, fruit trees, all flourish in this elongated oasis in the middle of the desert. It is also perfectly suited to grow opium poppies, and so it has been a major target for the Taliban.

Six months ago, much of Garmsir was under Taliban control, and the Marines had to fight their way in.

Today the Taliban are slow to engage the better-armed Americans directly, but instead have changed to planting IEDs targeting U.S. vehicles. There are roads running north south parallel to the river, but these have been repeatedly and heavily mined.  So instead, the Marines drive way out into the desert to make their north-south journeys.

Vast plains of flat red sand, with a network of vehicle tracks like some impossible wiring diagram - the Marines are careful not to keep taking the same route, even in the desert, or the Taliban will learn to put down IEDs along those tracks. There is a caravan route originally used by camels that runs just east of the green fields - there were two IEDs on that road, so since then the Marines even stay off the caravan route.

The only problem with driving in the desert is the soft sand. The heavy armored vehicles have strong engines with four wheel drive, but sometimes even that doesn't work. In the briefing before we set out the staff sergeant said "some vehicle will probably get stuck - it nearly always does..."

Indeed there was a U.S. truck still out there that had been stuck for two days, defying repeated attempts to drag it out of some treacherous quicksand.

Our vehicle slithered and struggled and growled its way through the soft patches of sand, and finally we stopped on a small bluff that looked out over the green zone and the expanse of red desert.

It all seemed very quiet and peaceful.