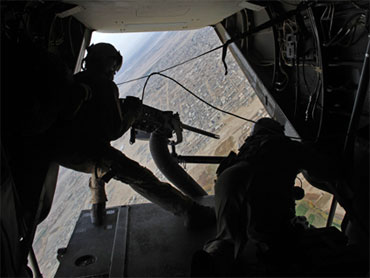 Hundreds of troops from the 3rd Battalion, 4th Marines and the Marine reconnaissance unit Task Force Raider were dropped by helicopter and MV-22 Osprey aircraft behind Taliban lines in the northern end of the Now Zad Valley of Helmand province, scene of heavy fighting last summer, according to Marine spokesman Maj. William Pelletier.

A U.S. military official in Washington said it was the first use of Ospreys, aircrafts that combine features of helicopters and fixed wing aircraft, in an offensive involving units larger than platoons.

The official, who spoke on condition of anonymity because he was not authorized to detail the operation, said that Ospreys have previously been used for intelligence and patrol operations.

A second, larger force pushed northward from the Marines' Forward Operating Base in the town of Now Zad, Pelletier said. Combat engineers were forcing a corridor through Taliban minefields with armored steamrollers and explosives, Pelletier said.

In all, about 1,000 Marines as well as Afghan troops were taking part in the operation, known as Khareh Cobra ("Cobra's Anger"), he said.

There were no reports of NATO casualties.

The spokesman for the Afghan governor of Helmand province, Daood Ahmadi, said the bodies of four slain Taliban had been recovered. Ahmadi said 150 Afghan troops were taking part in the operation, which had located more than 300 mines and roadside bombs by Friday evening.

The operation began three days after President Obama announced that he was sending 30,000 reinforcements to Afghanistan to help turn the tide against the Taliban. America's European allies will send an estimated 7,000 more troops to Afghanistan next year "with more to come," NATO chief Anders Fogh Rasmussen announced Friday.

Most of the new troops are expected to be sent to southern Afghanistan, including Helmand, where Taliban influence is strongest.

The new offensive aims to cut off the Taliban communication routes through Helmand and disrupt their supply lines, especially those providing explosives for the numerous lethal roadside bombs or improvised explosive devices that litter the area, known by Marines as "IED Alley."

Pelletier said several arms caches and at least 400 pounds of explosive materials had been found so far Friday.

"Right now, the enemy is confused and disorganized," Pelletier said by telephone from Camp Leatherneck, the main Marines base in Helmand. "They're fighting, but not too effectively."

Now Zad used to be one of the largest towns in Helmand province, the center of Afghanistan's lucrative opium poppy growing industry.

However, three years of fighting have chased away Now Zad's 30,000 inhabitants, leaving the once-thriving market and commercial area a ghost town.

British troops who were once stationed there left graffiti dubbing the town "Apocalypse Now-Zad," a play on the title of the 1979 Vietnam War movie "Apocalypse Now." The British base was nearly overrun on several occasions with insurgents coming within yards of the protection wall. The area was handed over in 2008 to the Marines, who have struggled to reclaim much of the valley.

In August, the Marines launched their first large-scale offensive in the barren, wind-swept and opium-poppy growing valley surrounded by steep cliffs with dozens of caves providing cover to Taliban units.

More than 100 hardline insurgents are believed to operate in the area, their positions so solid that a fixed frontline runs just a few hundred yards north of the Marines' base, according to Associated Press reporters who were with the Marines there last summer.
By Associated Press Writer Alfred de Montesquiou; AP Writers Amir Shah in Kabul and Pauline Jelinek in Washington contributed to this report