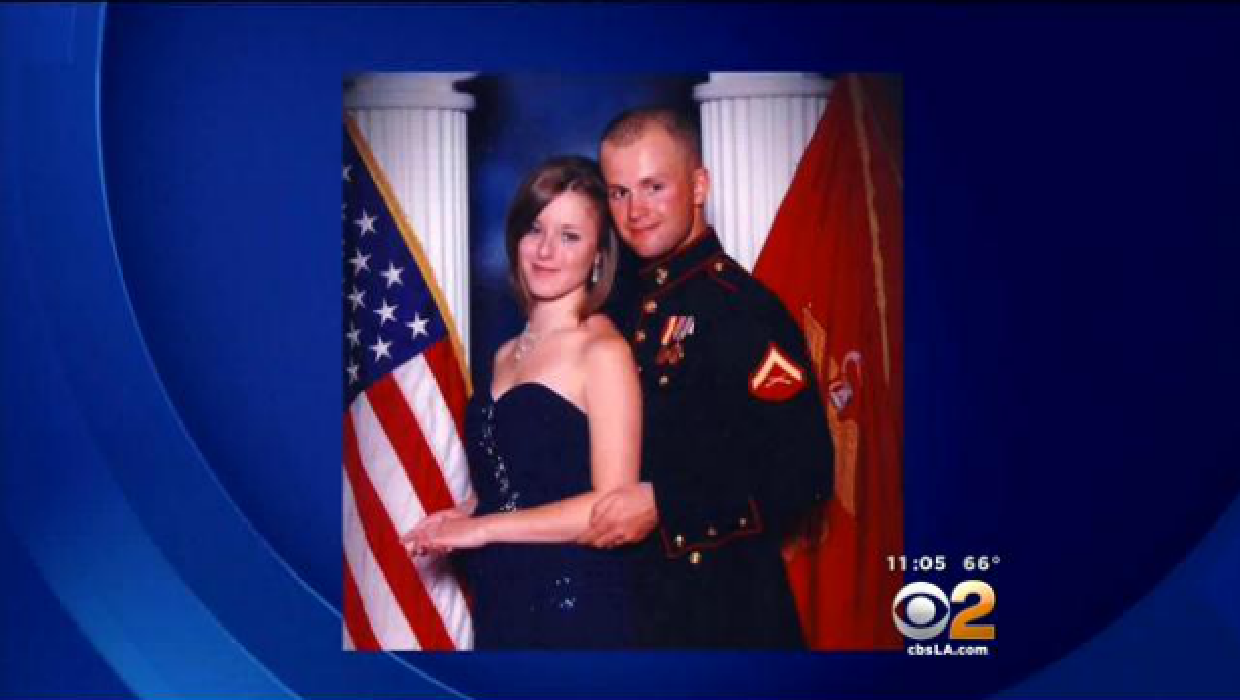 TWENTYNINE PALMS, Calif. - A recently discharged Marine who volunteered at a horse ranch with Erin Corwin, the missing pregnant wife of another California-based Marine, was arrested on suspicion of possession of a destructive device, authorities said Monday.

A press release issued by the San Bernardino County Sheriff's Department didn't say whether the cases of Christopher Brandon Lee, 24, and Erin Corwin, 20, are connected, however a probable cause affidavit obtained by CBS affiliate KFMB indicates Lee, who is described as the Corwins' neighbor, had been questioned in connection with the 20-year-old's disappearance.

The affidavit, which sought a warrant to search a horse ranch in Yucca Valley where both Corwin and Lee volunteered, says Lee initially told authorities that he and his wife only knew Corwin as an acquaintance and said he hadn't spoken with her in months. However, another neighbor and a friend of Corwin later told authorities that Corwin and Lee were romantically involved.

Jessica Trenthan, Corwin's friend in Tennessee, told authorities that Corwin may be pregnant with Lee's child and that Lee was worried if his wife Nicole discovered the pregnancy, she would divorce him and keep him from their child, the affidavit says.

Lee, then a Marine corporal, was arrested July 4 after a search warrant was served at the Yucca Valley ranch and was released on bail two days later, the San Bernardino Sheriff's Department said in a statement on Monday.

During the search, .223 caliber ammunition, a .45 caliber magazine with rounds, a Canon digital camera, a utility knife, a Samsung cell phone, a blue latex glove, tan boots, "camo" pants, a U-haul truck with contents, an iPod touch and a homemade destructive device known as a potato launcher were recovered, reports KFMB.

Documents obtained by the station also indicate that Isabella Megli, the owner of the Yucca Valley ranch, told authorities that Nicole Lee told her that "without a body, the detectives did not have a case against them and the detectives would never find the body."

When contacted Monday evening, Megli reportedly told the Desert Sun newspaper that she and Nicole Lee weren't specifically talking about the Corwin case, but similar cases.

The affidavit alleges Megli told authorities that she heard Nicole Lee berate her husband about "not being able to keep his lies straight when he was interviewed by detectives because he was dumb."

A day after Lee's arrest, he was honorably discharged after six years in the Marine Corps, the Desert Sun reported. He was in the Marines for seven years, last serving as a rifleman in the Individual Ready Reserve.

The arrest came about a week after the last time Erin Corwin was seen leaving her home apparently bound for Joshua Tree National Park while three months pregnant. Corwin disappeared under suspicious circumstances, authorities said. Two days later, her car was found outside the gate of the Marine Corps Air Ground Combat Center in Twentynine Palms, where her husband, Marine Cpl. Jonathan Corwin, is stationed. Both are from Oak Ridge, Tennessee.

The affidavit obtained by KFMB indicates that Erin Corwin told her friend, Jessica Trenthan, that she was going on a day trip with Lee to celebrate her pregnancy on June 28, the day she disappeared. She said Lee told Corwin that they were going to go hunting at an undisclosed location, about two hours from where they lived.

"It is highly likely Erin could have been harmed by an unknown firearm," the affidavit says. "Sometime after Erin left with Lee, her phone was de-activated (turned off). Detectives believe if Erin was injured and left at an undisclosed location, she would not [be] able to call for help."

When Lee was contacted by authorities again after learning about their alleged planned rendezvous, Lee admitted he became a close friend of Corwin and said they had kissed but never had sexual intercourse, the affidavit says. Lee also allegedly told police that his wife knew he and Corwin were becoming "too close."

According to the affidavit, Lee went on to tell police that he went hunting at Joshua Tree National Park on June 28 but said he was not with Corwin.

Sheriff's spokeswoman Jodi Miller said Lee was arrested as a result of a search warrant in an ongoing investigation, but would not give more details, nor say any more about the destructive device Lee is suspected of possessing.

Thus far, authorities have declined to publicly confirm a criminal investigation in connection with Corwin's disappearance. In fact, on Friday, the sheriff's department put out a news release stating that there were no suspects or "persons of interest" identified in the case, according to KFMB.