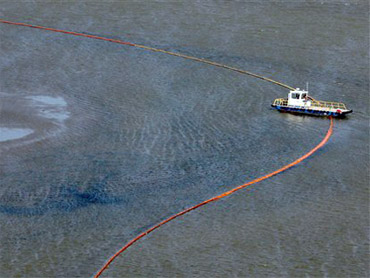 As Americans anxiously wait for a slick in the Gulf of Mexico to wash up along the coast, globules of oil are already falling to the bottom of the sea, where they threaten virtually every link in the ocean food chain, from plankton to fish on dinner tables everywhere.

Meanwhile, a giant concrete-and-steel box seen as the best short-term solution to bottling up the disastrous oil was loaded onto a boat Wednesday and the 100-ton (90-metric ton) contraption began its journey to the leak site about 50 miles (80 kilometers) off the Louisiana coast.

Oil has been gushing into the Gulf of Mexico at a rate of at least 200,000 gallons (755,000 liters) a day since an offshore drilling rig exploded last month and killed 11 people. Officials hope to lower the concrete-and-steel box the size of a four-story building to the bottom of the sea by week's end to capture some of the oil.

For marine life, though, the damage is already done, experts said.

"The threat to the deep-sea habitat is already a done deal it is happening now," said Paul Montagna, a marine scientist at the Harte Research Institute for Gulf of Mexico Studies at Texas A&M University-Corpus Christi.

Hail-size gobs of oil the consistency of tar or asphalt will roll around the sea's bottom, while other bits will get trapped hundreds of feet (meters) below the surface and move with the current, said Robert S. Carney, a Louisiana State University oceanographer.

Scientists say bacteria, plankton and other tiny, bottom-feeding creatures will consume oil, and will then be eaten by small fish, crabs and shrimp. They, in turn, will be eaten by bigger fish, such as red snapper, and marine mammals like sea turtles.

The petroleum substances that concentrate in the sea creatures could kill them or render them unsafe for eating, scientists say.

"If the oil settles on the bottom, it will kill the smaller organisms like the copepods and small worms," Montagna said. "When we lose the forage, then you have an impact on the larger fish."

Making matters worse for the deep sea is the leaking well's location: It is near the continental shelf of the Gulf where a string of coral reefs flourish. Coral is a living creature that excretes a hard calcium carbonate exoskeleton, and oil globs can kill it.

CBSNews.com Special Section: Disaster in the Gulf
Gulf Oil Spill, by the Numbers

"In my mind, they are at least as sensitive to contamination to oil as coastal habitat," said James Cowan, an oceanographer at Louisiana State. "They are in deeper water, so they are kind of out of sight, out of mind."

There are other important habitats in shallower waters, such as an ancient oyster shell reef off the Mississippi and Alabama coasts. It is a vital nursery ground for red snapper and habitat for sponges, soft corals and starfish.

Scientists are watching carefully to see whether the slick will hitch a ride to the East Coast by way of a powerful tide known as the "loop current," which could send the spill around Florida and into the Atlantic Ocean. If that happens, the oil could foul beaches and kill marine life on the East Coast.

"Once it's in the loop current, that's the worst case," said Steve DiMarco, an oceanographer with Texas A&M University-College Station. "Then that oil could wind up along the Keys and transported out to the Atlantic."

The Gulf ecosystem is already stressed by fertilizer and other farm runoff from the Mississippi River and the loss of wetlands to erosion and development. About 2,100 square miles (1,345,000 acres) of wetlands have disappeared since the 1930s in southern Louisiana.

Every summer, algae caused by fertilizer runoff sucks up the oxygen in a large patch of the Gulf, creating a "dead zone" from which all sorts of sea creatures must escape. This year, they will be swimming into waters fouled by the oil spill.

"We're always wondering when we may reach the point where straw breaks the camel's back," Montagna said. "At some point you have to wonder if we will see catastrophic losses."