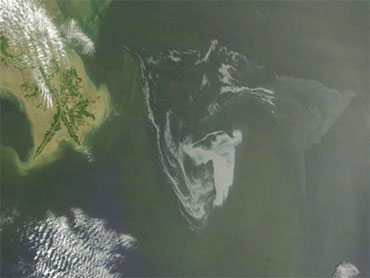 Even though the Constitution expressly forbids passage of ex post facto laws, some in Congress and at the White House want to retroactively raise the amount for which British Petroleum is liable in the April 20th oil well calamity.

Ex post facto is Latin for "after the fact." And an ex post facto law is one that is enacted or changed to apply retroactively to a crime or other action.

Under current law, BP is liable up to $75 million for cleanup of the oil spill.

But New Jersey's Democratic Senators Robert Menendez and Frank Lautenberg are co-sponsoring a measure to substantially increase the liability limit to $10 billion.

They seem unconcerned by Article 1, Section 9 of the Constitution which states explicitly:

"No bill of attainder or ex post facto Law shall be passed."

Over the years, the courts have ruled against some ex post facto laws - but have allowed others to stand.

"It runs against the grain," said Turley in a telephone interview with CBS News, "but on the other hand, the Court has upheld retroactive taxes."

"There have been precedents," he said, "so it would give Congress an edge in retroactively increasing BP's liability.

Whether it does or not, the White House is adamant in asserting that it will hold BP financially responsible for the costs of the oil spill containment and cleanup.

"They are fully liable for cleanup and recovery costs per the Oil Pollution Act of 1990," says presidential spokesman Robert Gibbs. And he points to an exception in the law that eliminates the limit on liability.

"The cap is not in place if somebody is found to be either grossly negligent... involved in willful misconduct, or in violation of federal regulations," said Gibbs at his daily press briefing yesterday.

Further, Gibbs made it clear that administration officials are also working on legislation to lift the $75 million liability cap and raise it.

"Obviously we've got a situation where (liability) could easily top $75 million in a short period of time," he said.

"This is about making Big Oil responsible for its excesses," said Sen. Menendez of his plan to expand liability after the fact.

And even BP's Chief Executive Officer Tony Hayward (at left) says his company is not looking to hide behind the protection of a liability cap.

He told a news conference yesterday that all legitimate claims "will be honored."

So much for Article 1, Section 9 of the Constitution. The Founders should have slapped an asterisk on the prohibition of ex post facto laws.*