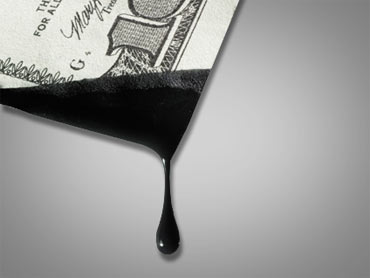 "BP is responsible for this leak. BP will be paying the bill," President Obama said this weekend as he surveyed the site of a massive oil spill in the Gulf of Mexico.

BP has acknowledged it is financially responsible for the clean up efforts of the spill, which started when a floating oil rig that BP leases exploded on April 20. The company also says it will pay compensation for "legitimate and objectively verifiable" claims for property damage, personal injury, and commercial losses.

So when the government hands BP the bill, how much will the oil company owe? The exact costs are unknowable right now, but it is sure to be significant.

So far the cost estimate for the clean up efforts is about $6 million per day, Coast Guard Petty Officer Connie Terrell told Hotsheet. The Coast Guard and BP are working around the clock to come up with a solution to stop the leaks as well as contain and clean up the oil, Terrell said. She added, "BP has spared no expense with their efforts to do this."

BP has said, however, that the cost of the clean up efforts could rise dramatically once the oil slick hits the land, Reuters reports.

On top of that, the endeavor could take months. Terrell said it is unclear right now how long it will take to secure the leak and clean the spill, but BP chief executive Tony Hayward said on NBC's "Today Show" this morning that that "the worst-case scenario is that we would need to contain this for two to three months whilst a relief well is drilled."

By comparison, Exxon said it spent $2.1 billion on cleanup after the 1989 Exxon Valdez spill off the coast of Alaska. It spent about a billion more on fines, damages, penalties and other expenses. The Exxon Valdez spill, however, was a contained spill with a finite amount of oil. It's unclear how many thousands of barrels of oil could be spilling into the Gulf currently, and experts are warning this disaster could be more serious than the 1989 spill.

"This spill at this point, in my view, is indeterminate," Adm. Thad Allen, commandant of the U.S. Coast Guard, said on CNN. "That makes it asymmetrical, anomalous and one of the most complex things we've ever dealt with."

The costs related to the spill will far surpass the clean up costs. The impacted coastline produces tens of billions in state revenues from tourism, the Washington Post reports. The spill will have a significant impact on the region's shrimp, oyster and crab harvests. Shipping along the Mississippi River could also be limited because of the location of the oil slick. States can also seek damages for expenses like the restoration of damaged wetlands.

Furthermore, 11 workers from the rig are missing and presumed dead, and their families will have to be compensated. Seventeen others were injured in the explosion; 3 were injured critically.

While BP is on the hook for the clean up costs, there is a $75 million cap on an oil company's liability for economic damages, or other damages claimed by individuals or government, under the Oil Spill Liability Trust Fund law. That law also established a government reserve funded through taxes on oil companies, as well as fines and penalties in the case of oil spills, to pay for cases like the current oil spill. There is currently $1.6 billion in the reserve, and this disaster could use up to $1 billion of its funds, the New York Times reports.

"The bottom line is that oil spills can leave massive holes in the economy," Menendez said. "If you spill it, you should have to fill it. We're glad that the costs for the oil clean up will be covered, but that's little consolation to the small businesses, fisheries and local governments that will be left to clean up the economic mess that somebody else caused."

While BP has said it will pay compensation for "legitimate and objectively verifiable" individual claims, there is already concern the company is short-changing Gulf Coast residents. Alabama's Attorney General Troy King on Sunday said he told BP to stop circulating settlement agreements among coastal residents that he said stripped people of their right to sue in exchange for $5,000. BP also on Sunday altered the terms of its waivers for volunteer clean up respondents after it came under scrutiny for forcing the volunteers to give up their right to sue in the case of an accident.

It's also possible BP could try to spread the costs to other companies, such as Cameron International Corp., which supplied the well head equipment that has been blamed for the accident, Reuters reports.