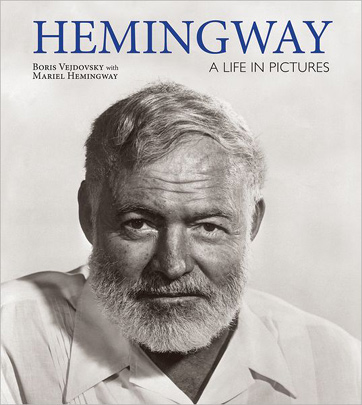 (CBS) Mariel Hemingway, along with author Boris Vejdovsky, is presenting her first-ever tribute to her grandfather Ernest by compiling carefully selected photographs from the great writer's life spanning from childhood onward in the book, "Hemingway: A Life in Pictures."

"I understand his appreciation for the best of the best, whether it was the best fly-fishing stream, the best Bordeaux, ...my grandfather knew what was great," says Mariel Hemingway. "He wanted to experience it, taste it, feel it and stand in the face of anything that stretched him beyond the limits of his own comfort."

A total of 350 photographs from the Hemingway family album follow the author from his birth in 1899 in suburban Chicago to 1961, when he committed suicide, showing themes and patterns in his life.

Readers can see a 5-year-old Hemingway holding a fishing creel that is almost as big as he is, a wounded Hemingway from World War I, photographs of the writer in Paris during the 1920s with Ezra Pound and Gertrude Stein, photos from safaris in Africa and many more.

Mariel Hemingway, who is best known for her role in Wood Allen's 1979 film "Manhattan," says, "I love being Ernest Hemingway's granddaughter because I feel that I have been given a gift of seeing the remarkable things that life has to offer."

Boris Vejdovsky, author of "Hemingway: A Life in Pictures" and associate professor in American literature and culture at the University of Lausanne in Switzerland, says, "More than any other twentieth-century writer, Ernest Hemingway transformed the world he lived in and the landscape of Anglo-American and world literature."

The book, published by Firefly, will be available in December.