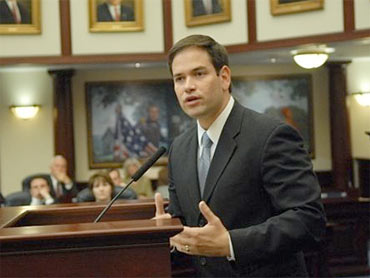 The investigation has not been publicly confirmed, and Rubio's campaign adviser told the Times that no federal investigators have contacted Rubio.

Nevertheless, the reported investigation puts new scrutiny on the former Florida House Speaker just as speculation mounts that Florida Gov. Charlie Crist will run for the Senate as an independent, leaving the GOP nomination for Rubio, who is far ahead in the polls.

The IRS is investigating expenses that Rubio and two other officials, ex-state party chairman Jim Greer and ex-party executive director Delmar Johnson, put on the American Express cards issued to them by the Republican Party of Florida, the newspapers report. Investigators are reportedly looking into whether Rubio and the others used their GOP credit cards for personal expenses without reporting or paying taxes on additional income.

The newspapers reported earlier that Rubio charged more than $100,000 to his GOP credit card during his two years as House speaker for expenses including grocery bills and plane tickets for his wife. Rubio released a statement saying that his expenses were for "legitimate political purposes."

"When I made personal charges, I paid for them directly to American Express," the statement said. "I have not been contacted and don't know anything about any potential inquiries, but I welcome the chance to set the record straight once and for all."

Crist has zeroed in on the expenses put on Rubio's credit card, charging that he used party money inappropriately.

"He's trying to pawn himself off as a fiscal conservative," Crist said in March. "And yet just in reason weeks, two weeks ago it has come out in news accounts he had a Republican Party of Florida credit card that he charged $130 haircut, or maybe it was a back wax." (There is no evidence that Rubio got a "back wax.")

Meanwhile, the Herald and the Times report, the IRS, the FBI and the U.S. Attorney's Office in Tallahassee have launched a separate criminal investigation into the use of Florida GOP Party credit cards. Former House Speaker Ray Sansom and others could reportedly face charges of tax evasion and making false statements on their tax returns, according to the newspapers.