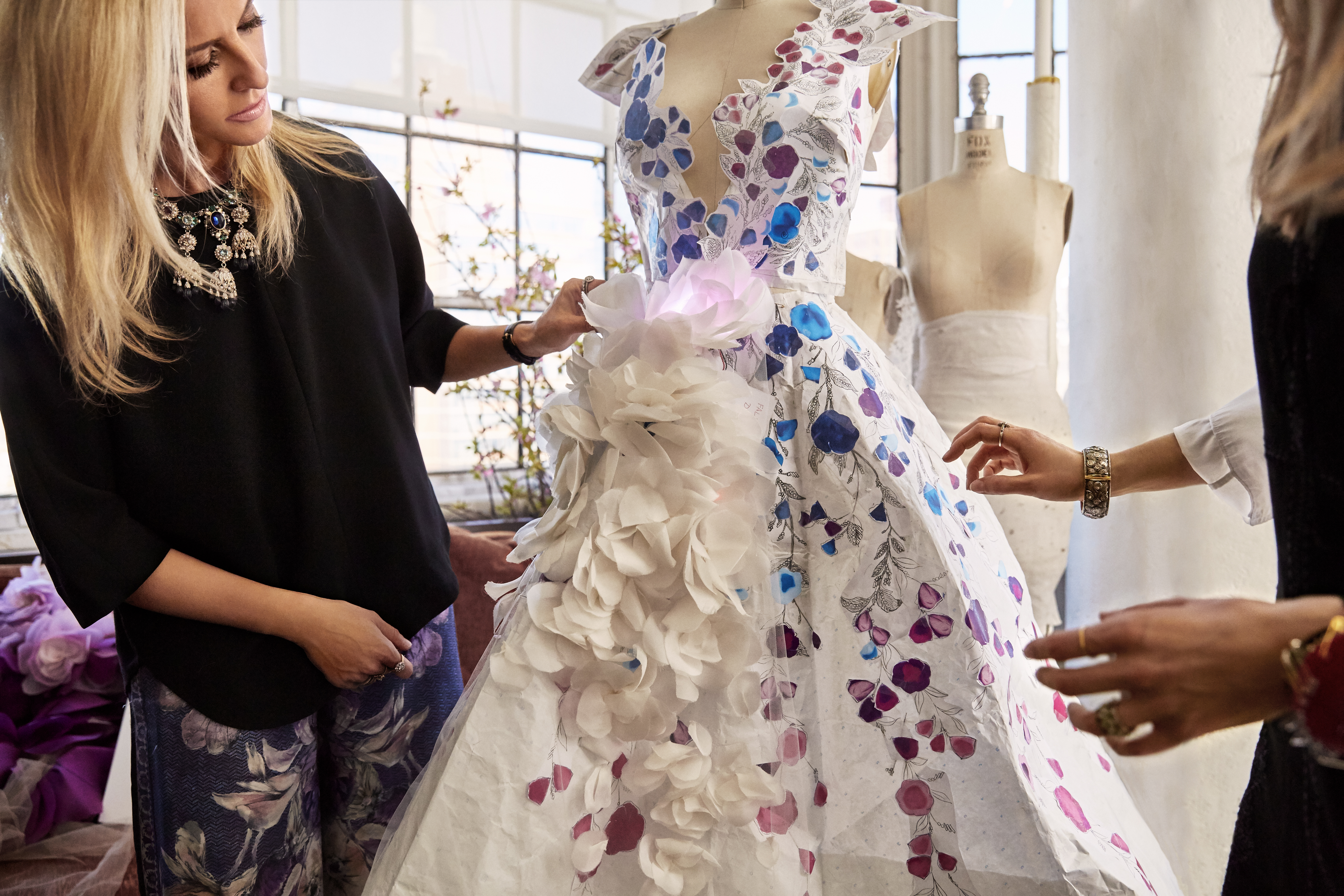 The first Monday in May brings one of the marquee fashion events of the year -- the Met Gala. Held at the Metropolitan Museum of Art in New York City as a benefit for the museum's Costume Institute, this year's gala comes with an unexpected high-tech twist. The theme of the evening, and the accompanying museum exhibition, is "Manus x Machina: Fashion in an Age of Technology." In keeping with the theme is a rather unlikely collaboration -- IBM is joining forces with the fashion house Marchesa, known for its whimsical, romantic designs.

For Monday's event, Marchesa designers and co-founders Georgina Chapman and Keren Craig teamed up with IBM's cognitive computing system Watson to design a "cognitive dress" that will be worn by a yet-to-be-named model. The dress is a data-driven garment whose embedded LED lights will change colors in real time, shifting with the social media mood of users who are commenting on the gala through Twitter.

"I have to say, this collaboration was amazing. When you think of Marchesa, you don't think of it as being 'techie,' of the tech world, but what I found so exhilarating about the project was that it was such a creative endeavor," Chapman told CBS News ahead of the May 2 event. "The challenge was how do you keep the dress so quintessentially Marchesa? It really has to be a marriage between the two -- between design and tech."

Chapman was speaking at a private preview at Canoe Studios in the Chelsea neighborhood in New York, surrounded by sketches and mockups of the dress that were juxtaposed alongside plastic boxes containing glowing pieces of fabrics -- parts of the actual dress. It was this fusion of art and technology that Chapman said was the most exciting part of the project for her.

"In designing this, I went back to thinking 'what would be my dream dress, and how would I use technology to make that happen?' I had this vision of the dress that could change color with emotion, and that's the direction we headed," she said.

So, how does it work? The dress utilizes the same kind of cognitive tools that Watson has been applying to everything from health care to cooking since the computing system first burst onto the scene in 2011, when it famously beat human quiz show champions on "Jeopardy!" Since then, IBM's cognitive computing system has only been growing smarter.

The cognitive dress relied on the various cognitive APIs (application program interfaces), or tools made available to developers from IBM Research, and input from developer partners like Inno360. The Marchesa designers first selected five key human emotions - joy, passion, excitement, encouragement and curiosity - that they wanted the dress to convey. IBM fed Watson hundreds of images of past Marchesa designs, with the cognitive system ultimately choosing a color scheme, identifying different colors with different emotions. For instance, red would represent "confidence," while grey would be tied to "futurism."

The company's developer partner Inno360 sourced a fabric for the design team that would ultimately be appropriate for Marchesa's overall aesthetic, but that could incorporate IBM's technology.

The process of educating Watson about Marchesa's past designs, and then Chapman and Craig actually formulating the new design, began in earnest only about seven weeks ago, Jeffrey Arn, IBM Watson marketing manager, told CBS News.

"I really think this is a great showcase for what Watson can do," Arn said. "The colors are manipulated by values that are output by one of our APIs. When you build this platform, you build it strategically, you open it up for using it for a wide range of purposes."

Arn said that, from the tech perspective, it was eye-opening to witness, firsthand, the creativity behind the dress itself. Similarly, he said that once it is on full display, people scrolling through social media may be surprised to see just how wide Watson's reach can be.

"When we first met with Marchesa I think they had heard of Watson in the context of other things, but they ended up asking similar questions of us that we were asking of them: 'How are we going to think of this in the context of a dress?' It was interesting to see, in the short time of this project, something that shifted from just a curiosity to really being blown away by the inspiration behind the dress," Arn added. "One of the things personally for me that really stood out -- I could see the idea of how this partnership brings the best of both sides. You can see how technology brings certain elements to the table. We were blown away by the designers' creativity and skill, but the ultimate dress, the technology is something neither side could do on their own."

Craig echoed those sentiments in that the collaboration with Watson helped a brand that is "all about fantasy" create an even more "heightened fantasy."

"We had some really great meetings with them in terms of the silhouette, and after I think of the first meetings, we came back and George literally sat down at her desk and we come up with this confluence of ideas," Craig said. "I think she was very inspired by the fact that we could do things that we could never design before. The silhouette came from us -- that was ourselves. The technology is from them."

Will this usher in a new era of connected, "smart" high fashion clothing?

"Maybe, who knows? The possibilities are endless," Chapman said. "Seeing what a cognitive computer can do was truly exciting for us, and the design that you'll see is one thing and logistically what it can do for the business is also incredibly exciting. It can speak to our consumers and talk to our retailers in a way and cut out a lot of the processes that take time. To be able to engage with and aggregate that kind of information is kind of incredible."