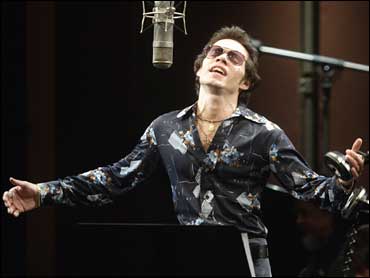 Marc Anthony had a connection to Hector Lavoe long before he was tapped to portray the salsa legend in the new movie "El Cantante."

Lavoe rose to fame during the 1970s, while Anthony was growing up in a New York City brimming with the rhythms of salsa's golden age.

Anthony, who went on to become the greatest salsa singer of his generation, released his first album, "Otra Nota," in January of 1993.

The coincidence had never dawned on Anthony until it was suggested to him in a question during an interview with Judy Faber of The ShowBuzz Wednesday.

"I remember that year being a milestone year for me," he said. "I remember when he passed, and I went to his funeral. After the funeral, as I was walking out, people were yelling that it was up to me now, it was up to me."

The experience of transforming himself into Lavoe for the movie was emotional, not just for Anthony but also for the people around him.

"It hit me when we surrounded ourselves with a lot of his musicians," Anthony said. "We were on stage, and two of them were crying. They said to me 'you don't understand, this was always our point of view.' For a lot of them, it was almost like their last chance to say goodbye, in a weird way. Same thing with the family. When the family saw me on the set they just wanted to hug me. It was an amazing experience all the way around. I can't believe I'm standing here talking about it. It's so surreal."

Anthony and his wife, Jennifer Lopez, who co-produced "El Cantante" and stars as Lavoe's wife Puchi, were in Puerto Rico Tuesday for the premiere of the film.

"We woke up in Puerto Rico and ended up in New York and just surrounded ourselves with family. It was a pure family day. We had a great time," he said.

Anthony wouldn't reveal what he got his wife of three years for her birthday. But, he did offer up some advice for couples who work together.

"Just know what it is you're stepping into. Avoid the pitfalls. Don't make it your life, don't take it home," he said.

Anthony chatted about the film on The Early Show with co-anchor Harry Smith. To see that interview,
click here
.