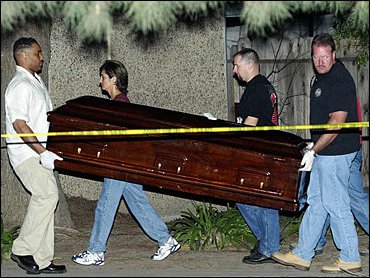 Police carried 12 wooden coffins out of a home as they searched for evidence to explain why a man allegedly killed nine people believed to be his children, some possibly the product of incest.

Investigators removed the coffins and several large paper bags out of Marcus Wesson's house Monday night and a tow truck pulled away a yellow school bus, which had been a fixture in the driveway.

An antique store owner has said Wesson bought hand-carved, mahogany coffins about five years ago, saying he planned to use the wood to repair a houseboat.

Attorney Frank Muna, a lawyer who had represented Wesson in civil matters, said he talked to the store owner and "we both found it odd and very disturbing because who would need ten caskets unless you're in the funeral business?"

All nine victims had been shot to death, according to the coroner's office. Investigators were still working to determine the relationships among the victims, who were found tangled in a pile of clothes when police went to the house Friday about a child custody dispute.

Wesson walked out of the house covered in blood and was booked on suspicion of nine counts of murder. Authorities said Wesson, 57, may have been involved in polygamy and is thought to have fathered children with at least six women, including two of his own daughters.

The victims, who had six different mothers, showed no signs of physical or sexual abuse, said coroner Loralee Cervantes.

Wesson has cooperated with the investigation, police said, but no motive had been determined.

"We believe that the individual responsible for the nine murders is suspect Wesson, but we have not ruled out the possibility that there may be someone else involved," said police chief Jerry Dyer.

Authorities expect to release the names of the victims by Friday, a 24-year-old woman and eight children ranging in age from 1 to 17.

Dyer said the convoluted family structure has complicated the investigation. "The coroner's office has not been able to verify the identity of all the victims," he told reporters. He expects to need DNA evidence to establish identities and parentage.

Acquaintances said Wesson and his family appeared to live a nomadic, insular existence. The family moved several times in recent years, from a small boat anchored off Santa Cruz to the mountains outside Watsonville, before settling in Fresno.

In the early 1990s, Wesson lived with a few children on a battered, 26-foot sailboat that had no toilet or bathing facilities.

During that time, he was jailed briefly after being convicted of welfare fraud, the Santa Cruz Sentinel reported. Wesson failed to list his boat as an asset on welfare forms. He also was frequently delinquent with his slip fees, the newspaper said.

Wesson and his family were violating city codes by living in the building where the shootings occurred, which was zoned for commercial use, the Fresno Bee reported Tuesday. They were given a citation March 1, calling for a $100 fine, and ordered to leave the building or acquire a special permit.

"The day of the murder was the day they had to comply with the administrative order," Fresno Planning Director Nick Yovino told the newspaper. "As far as we're concerned, that was a coincidence."

Other acquaintances said Wesson appeared with women and children who seemed to be under his control. Muna, a lawyer who sold the murder suspect his house in 1999, said the women wore dark robes and scarves, walked behind Wesson and did not speak when he was present.

"The women would often go and stand behind him, look down, avoid eye contact. He was the only one that was allowed to talk," he told CBS News Early Show co-anchor Hannah Storm. "They were very much under his control. It was very clear that they were subservient to him. He had control of their finances, pretty much all aspects of their lives."

Muna said Monday police interviewing him said Wesson killed his children because he didn't want them taken away from him. "He really thinks what he did was right," Muna said.

"I think he was backed up into a corner," he told CBS News. "In our situation, he had just lost the house that he had been working on for quite some time."

Police Lt. Herman Silva refused to confirm Muna's account, saying only, "We're looking at every possible motive and not dismissing anything."

Wesson's sons, Dorian, 29, who lives in Santa Cruz, and Serafino, 19, who lived at the Fresno house, could not say whether he was married or how many children he has fathered, the Fresno Bee reported.

The children were home-schooled because Wesson did not trust public education, his sons said, and Wesson, who did not work, was supported by the women.