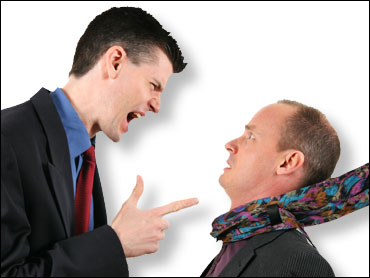 If you think bullying is reserved for children on the playground, or others online, think again. According to a new study, many adults fall victim to bullying -- at the office.

CareerBuilder.com surveyed more than 5,000 full-time workers and found that more than one-in-four of the respondents have felt bullied at the workplace.

See the full results of the survey here.

Co-anchor Chris Wragge noted women reported a higher incidence of being bullied. Among those surveyed, 34 percent said they felt they were a victim of bullying compared to just 22 percent of men.

"Well, think about a bully," said Mary Lou Quinlan, a successful businesswoman and chief executive officer of Just Ask a Woman. "A bully needs a target, and generally, that target is someone farther down the food chain. Unfortunately, there are more women who are less senior, so they make a bigger target. I think, also, women have radar that can pick up the unseen, subtle bullying signals. So that sensitivity probably raises the concern."

Wragge asked, "Is (it) a little bit more sensitivity rather than just kind of being overt bullying?

Quinlan responded, "It can be. I think today's bullying is actually a little scarier. It's not the screaming in the conference room. It's the sabotaging of ideas when no one else is there. That's a little scarier."

The age factor, Wragge noted, is eye-opening. According to the study, 29 percent of workers aged 55 and older and those age 24 and younger reported being bullied.

"The two highest percentages of any of the ages surveyed," Wragge pointed out. "Why were these age groups so popular in this category?"

Quinlan said, "It didn't surprise me, because they're really the most vulnerable. If you think 55 and older, unfortunately in this economy, they're the ones who are most fearful of the pink slip, because the opportunities aren't there. So they are a target. Also, 24 and under, it's a confidence issue. They maybe don't know any better, and think that's the way you're supposed to be treated in the workplace. Not true, but they're still new."

Older workers, Quinlan said, "(have) seen enough battles. (They think) 'Who needs one more conflict? I'd rather just keep the job and put my head down."'

So should you confront a workplace bully?

Among those surveyed, 47 percent of all workers who reported they'd been bullied said they'd confronted their bully directly. Of those people, 43 percent said the problem stopped and 13 percent said it got worse. And 44 percent said everything stayed just about the same.

So should you confront a bully based on those results?

"I still say do it," she said. "Your self-esteem needs it. A bully sees weakness, and it will only get worse. You can either suffer in silence and have a stomachache or just stand up and take it."

To confront the bully, Quinlan says you should treat it like a work assignment.

Wragge observed that 28 percent of people took their bullying issues to Human Resources. Of those, 38 percent said measures were taken to resolve the problem. However, an alarming 62 percent said that nothing was done.

Shouldn't companies make sure that, when a complaint is registered, they do something?

"You'd think so," Quinlan said. "But really, H.R., they're not the hall monitors of the schoolyard. Their job is to keep the company balanced and successful, so they can be great. But they're going to defend whoever is bringing money in. It could be the bully is farther up and is a revenue generator."

Quinlan said if you're on receiving end of this treatment, you want to get your facts straight first.

"It's an emotional feeling," she said. "You might want to scream or you might want to have a big tirade of your own. Waste of time. Put it aside and get the pattern, keep notes. Make sure there's more than one time, so it wasn't just a one-off."

She continued, "I'd look for at least two or three occurrences before I decide that it was personal. I'd also be sure I could get some witnesses."

So you do you communicate with a workplace bully?

"I think the best way to defuse, especially the ignorance, but even the anger, is to walk in in an atmosphere of mutual respect," Quinlan said. "At least try the, 'I'm here to be successful, and so are you. So let's just put it on the table, and you're going to have to knock it off." '