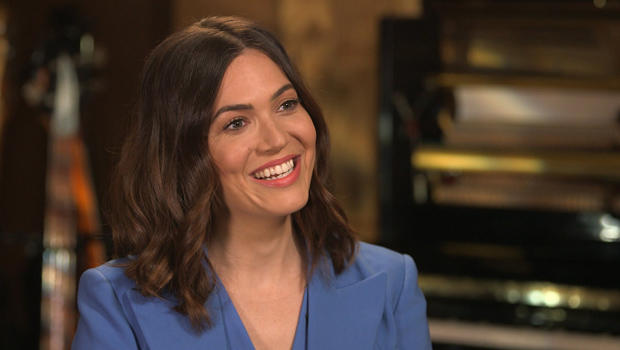 Mandy Moore has got an interesting career going, in that a lot of her fans still think of her as a teenager, thanks to the 1990s pop music she made. And then, she's got a whole other group of fans that think of her as a grandmother, thanks to her role as Rebecca Pearson on NBC's hit family drama, "This is Us."

The actual Mandy Moore is somewhere very much in-between – not a kid anymore, but nowhere near retirement. In fact, she's doing more than ever.

"I'm 35, and I've been doing this since I was 15," Moore said. "Twenty years of having a career, like, all the successes, all the failures, everything in-between."

Before the pop hits and the network TV roles, there was an eight-year-old Amanda Leigh Moore growing up, with big dreams, in Orlando, Florida.

"The Orlando Sentinel used to have this audition hotline that every Friday I would call before school," she recalled. "And I would sort of, like, write down with my pencil and paper what ones sounded appealing, what ones were looking for children my age. … I was my own agent!"

And an effective one, it turns out. when she set her sights on her next big performance opportunity: singing the national anthem at Florida sporting events.

"I begged my parents to get me a little pitch pipe, and they recorded me. And then my Mom, so the story goes, hand delivered this VHS cassette of me singing the national anthem with fresh baked cookies. And I think that's what, like, solidified everything for me. I got the gig."

All that performing in front of crowds started to get Moore some attention. Even record labels took notice, and before long Mandy Moore was a certified teen pop star, with hits like "Candy," which reached the Billboard charts, but even impressively had a two-month stint as one of the top music videos on MTV:

"You were, obviously, really successful with this stuff," said correspondent Luke Burbank. "But you weren't, like, Brittany Spears successful?"

"Was that kind of lucky?"

"So lucky," Moore said. "I think about that often, 'cause there's wasn't that sort of expectation like, 'You've had hits. You have to deliver more hits.' But also, it allowed me to branch off into the acting world and to film and television."

And she didn't just sing on MTV; she started hosting shows, which in turn led to acting roles in films like "Saved" and the teen tearjerker, "A Walk to Remember."

Burbank asked, "Was there a point where you started to think, 'Oh, I'm actually an actor who sings'?"

"I think I became aware, after a while, that that was probably the perception out in the world of me, and still probably to this day, which is fine. I have sort of leaned into the idea that it allows me to continue making the kind of music that I want to make, because there isn't that same sort of expectation."

As she outgrew her days as a teen idol, Moore started writing her own music, and had released five solo records on various labels, when she met and married the singer Ryan Adams. It was a romantic partnership Moore thought would spark even more musical creativity. But, she said, the opposite is what happened.

"I was at a point in my life where I was the most comfortable making myself the least priority," Moore said. "And I made myself as small as possible in order to make somebody else comfortable."

They divorced in 2016, and Moore, shaken by the end of her marriage and a lack of acting work, considered leaving Hollywood: "I had done four failed TV pilots. So, I was kind of at the point where I was like, 'Maybe this acting thing is done for me,'" she said. "Yeah, this business has a way of beating you down!"

But she stuck it out. "Once I removed myself from that and gave myself time to heal from it, and realize the strength and the power that I bring to any situation, 'cause I've been doing this now for so long, once I dropped those bags, I realized the power that I had," said Moore. "And I just haven't looked back."

Then came the role of a lifetime, as the matriarch of the Pearson family. The show, "This Is Us," has wildly exceeded anyone's expectations. It's in its fourth season as one of television's most popular programs. And that's not the only good news for Moore; it turns out she's making music again, too, with her second husband, musician Taylor Goldsmith.

Burbank asked Goldsmith, "What was your awareness of, like, the music of Mandy Moore before you guys [started dating]?"

"It was funny because, like, when we first started dating, I was like, 'Maybe I should know more of this stuff?'" he replied. "So I, like, Googled some of the older songs. And I was like, 'I doubt this is who she is anymore,' which turned out to be kinda true."

Her recent engagement in L.A. was just a warmup for Moore's first tour in 10 years starting later this month, to promote her new album, "Silver Landings" a project she says was a lifetime in the making.

To watch Mandy Moore perform "Save a Little For Yourself," from her album, "Silver Landings," click on the video player below:

Moore said, "This record is joyful and it's a celebration and it's about momentum forward. I'm so sick of looking in the rearview mirror. I did so much of that for too much of my life."

And one more thing Moore is doing now? Allowing herself to appreciate the teenage version of herself, the girl who started it all.

"I love that girl," she said. "That girl, she's in me still. She's the reason I'm here talking to you. Like, I have so much affection and respect for her."

Burbank said, "If this were a therapy session, we would say you're attending to yourself, which is really positive!"

You can stream the new Mandy Moore album "Silver Landings" by clicking on the embed below (Free Spotify registration required to hear the tracks in full):