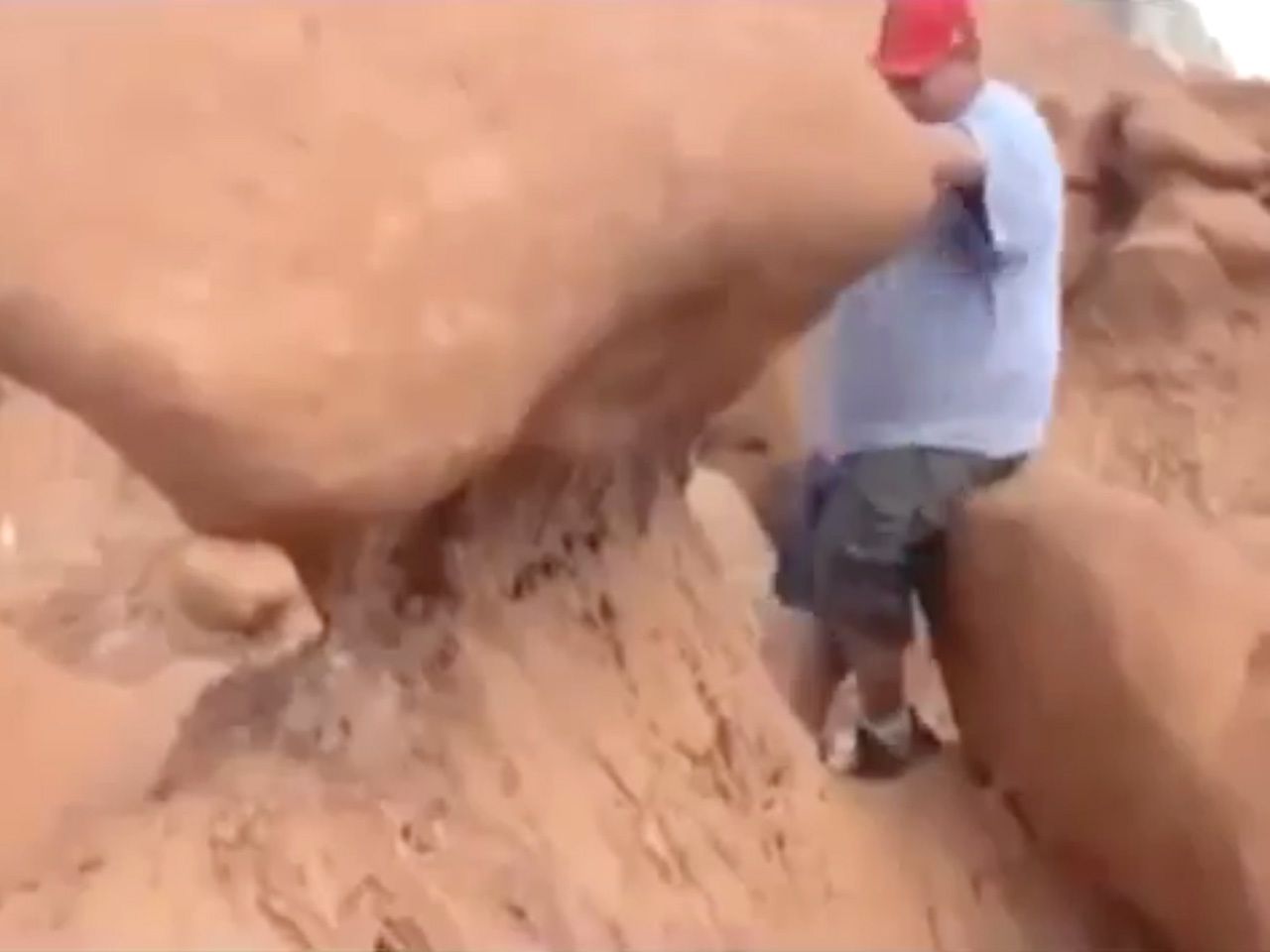 SALT LAKE CITY A Utah Boy Scout leader whose toppling of an ancient rock formation in a state park was captured in a viral online video is now facing questions over a personal injury lawsuit he filed last month in which he claimed to have been "debilitated" by the accident.

Glenn Taylor, the man who is seen actually dislodging and pushing the rock to the ground, filed a personal injury lawsuit against a woman and her father for injuries he says he suffered in a 2009 car crash.

Taylor, of Highland, sued Alan MacDonald in September, claiming his daughter caused a 2009 car crash that left him with debilitating injuries. Taylor's claim states that, due to the accident, he injured his back and had to "endure great pain and suffering, disability, impairment, loss of joy of life," reports CBS Station KUTV. Taylor also says in the lawsuit that the accident was "debilitating."

MacDonald said he was surprised when he saw the lawsuit come across his desk, as no one had gone to the hospital following the 2009 accident.

After watching the viral video of Taylor pushes a large boulder from its perch, MacDonald told KUTV that he thinks Taylor doesn't look debilitated at all.

"He's climbing over other rocks," he said, "then he lines up, gets leverage and pushes that big old rock several times before he finally pushes it over. Then he turns and twists and high-fives and yucks it up and flexes his muscles.

"He just doesn't look like a terribly disabled person to me," he said.

When asked by KUTV correspondent Chris Jones if he had filed a lawsuit claiming to be debilitated, Taylor replied, "Yes, from four years ago."

"You don't seem very debilitated [on the video]," Jones said,

"You didn't see how hard I pushed," Taylor replied.

"It looked like you were pushing pretty hard," the reporter said.

To watch the raw video of the Utah rock-toppling, click on the video player below.

Taylor's attorney, Mark Stubbs, told KUTV that the video may not play well to a jury, but it's only one piece of a larger case. He said just because his client is beginning to recover from his back injuries, does not mean he hasn't suffered past pain.

Taylor's medical bills stemming from the accident could continue for years, Stubbs added. According to his suit, Taylor has incurred some $5,000 in medical-related expenses.

They insist they took the action because they believed the balanced rock was about to fall and could hurt their Scouts and other park visitors.

Taylor has said he regrets his actions and agrees "there's a better way to treat the outdoors."

The Boy Scouts of America has branded the Scout leaders' action as "reprehensible" said it would take "appropriate action" after a review of the matter.

Hall told the Deseret News that since the video went viral they have received more than 100 online death threats, from people as far away as Germany, Spain and New Zealand. "I mean, hundreds and hundreds of hateful messages," Hall said.