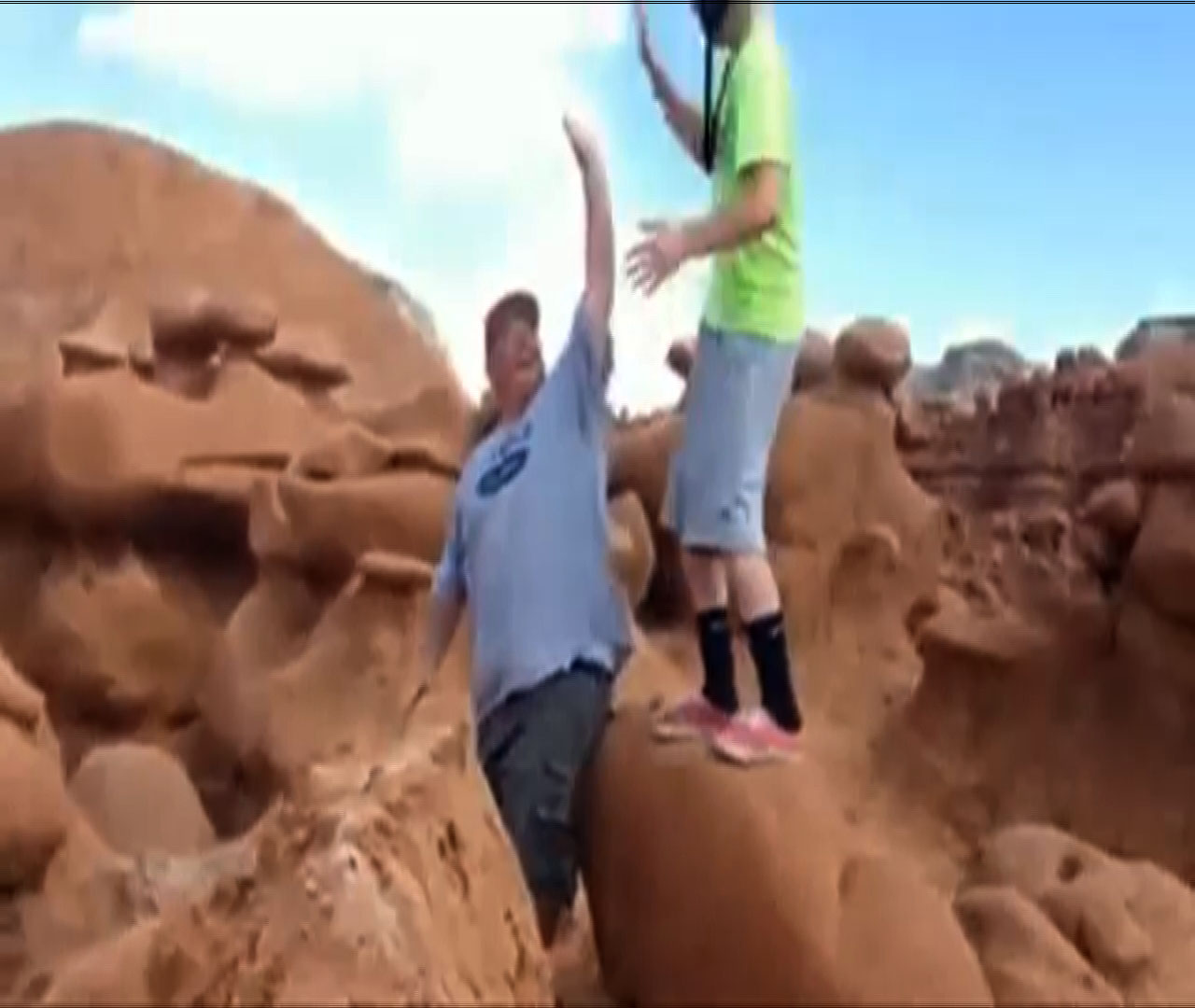 SALT LAKE CITY Two Utah Boy Scout leaders who purposely knocked over an ancient desert rock formation in a state park say they've received death threats from around the world since a video of the toppling went viral.

In the video shot by Dave Hall of Highland, fellow Scout leader Glenn Taylor pushes a large boulder from its delicate perch, sending it tumbling down a small embankment as the men cheer and high-five.

Hall said they've received more than 100 online death threats from people who disapproved of their Oct. 11 action in Goblin Valley State Park. The central Utah park is dotted with thousands of the eerie, mushroom-shaped sandstone formations.

"I've gotten death threats from people in Germany and Spain and New Zealand ... I mean hundreds and hundreds of hateful messages," Hall told the Deseret News.

He acknowledged the video makes it look like they are "guys just out enjoying themselves by destroying stuff," but insisted they took the action because they believed the balanced rock was about to fall and could hurt their Scouts and other park visitors.

He said he has learned state and national parks are "very, very sacred" to many people, and they should have instead notified park officials about the situation.

"There is a right way and wrong way to handle a dangerous situation in the park," he told the Tribune. "And it is not to take it into your own hands. It is to find someone in authority and let them be the one who does it."

Taylor told KSL that he regrets his actions and agrees "there's a better way to treat the outdoors."

Hall said the men cheered because "it was a huge adrenaline rush seeing a boulder the size of a car being pushed over by one man. It's like fireworks going off. It was like a spontaneous, 'Wow, I can't believe that just happened.'"

The Boy Scouts of America was "shocked and disappointed by this reprehensible behavior," said Deron Smith, national spokesman for the organization. The action ran contrary to the organization's longtime leadership in conservation and teaching of "leave no trace" principles, he added.

"We are reviewing this matter and will take appropriate action," Smith said in a statement.

Utah State Parks officials found the video disturbing and have asked that criminal charges be considered in the case, spokesman Eugene Swalberg said.

The Emery County Attorney's Office confirmed that it has been contacted by state park representatives and will review the case once an investigation is complete.

Hall and Taylor are leaders of a Varsity Scout team for boys ages 14 and 15 sponsored by their Mormon church ward in Highland.