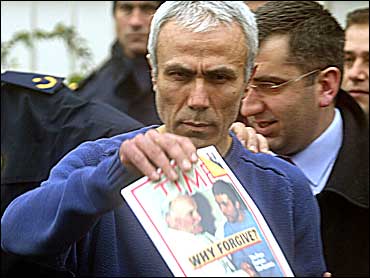 The Turkish gunman who shot Pope John Paul II in 1981 left prison a free man Thursday after serving more than 25 years behind bars in Italy and Turkey for the plot against the pontiff and the slaying of a Turkish journalist.

To the cheers of nationalist supporters, some of whom threw flowers in celebration, Mehmet Ali Agca - whose attempt to assassinate the pope gained notoriety for himself and shame for his homeland - was whisked into a white sedan and through the gates of the high-security Kartal Prison, as dozens of police officers stood guard.

Ordinary citizens reacted with disgust at the release of the man who became their most infamous countryman.

"A murderer like him who has stained Turkey's image should not be released," Deniz Ergin, a 23-year-old university student in Istanbul, said Wednesday.

Agca shot the pope as he rode in an open car in St. Peter's Square in Rome on May 13, 1981, and was captured immediately. The pontiff, hit in the abdomen, left hand and right arm, recovered because Agca's bullets missed vital organs.

In Vatican City, the family of a then-15-year-old girl who disappeared two years after Agca's assassination attempt is hoping Agca's release may shed some light on her whereabouts.

Shortly after the June 1983 apparent abduction of Emanuela Orlandi, the daugher of a Vatican messenger, a message was received – purportedly from the kidnappers – who demanded that Agca be freed.

That never happened, and to this day, no one knows what happened to Orlandi.

Her family is now asking that the case be re-opened on the grounds that "new elements" have emerged warranting investigation.

Many Turks were surprised and outraged at last week's court decision releasing the gunman on parole after serving 4 1/2 years in prison for killing a left-wing columnist, Abdi Ipekci, in 1979.

"Agca is not just the murderer of my father ... I see him as our national assassin," Ipekci's daughter, Nukhet, said in a letter published on the front page of his newspaper, Milliyet. "He is a person who has caused the words 'Turkish' and 'murder' to come together."

His lawyer, Mustafa Demirbag, told The Associated Press in an interview Wednesday that Agca benefited from amnesties and recent amendments to the penal code which led the court to deduct the 20 years he served in Italy from his 36-year prison term - the maximum sentence for any crime in Turkey.

Demirbag said he would take Agca, who turned 48 on Monday, to a military recruitment center and to a military hospital, a routine procedure, following his release.

Pope John Paul, who died last April, met with Agca in Italy's Rebibbia prison in 1983 and forgave him for the shooting. The motive for the attack remains unclear.

Agca's lawyer said the gunman is sane and wants to work for democracy following his release.

"He says, 'I want to extend the hand of peace and friendship to everyone. I want to engage a struggle for democracy and culture,"' Demirbag told the AP.

The court ruled on Jan. 5 to free Agca, saying he had completed his prison term in Turkey.

"Agca has received no special treatment - he is just benefiting from current laws," Demirbag said. "We've received several calls and hundreds of e-mails supporting him and saying justice is finally served. Hundreds of people, even some from abroad, are on their way to Istanbul in buses and cars. They are from every segment of the society but mostly nationalists."

Agca, who has been known in the past for frequent outbursts and claims that he was the Messiah, has never undergone a thorough psychological test, although he met briefly with a psychiatrist who declared him sane enough to stand trial for shooting the pope in 1981.

The question has critical importance because the gunman, a draft-dodger who escaped from a military prison in 1979, faces the possibility of being enlisted in the army. However, the military generally accepts conscripts only until age 41.

It was unclear whether Agca would face any criminal charges for evading the military and escaping.

"He is a kind of man who has never lost contact with the outside world. His body was inside but his brain was outside," Demirbag said. He said Agca watched television, read newspapers and exercised for a few hours every day while held in solitary confinement.

The question of why Agca shot the pope is one which has been debated for years.

There were suspicions that Agca acted on behalf of the former Soviet bloc, fearing that the Polish-born pope would help trigger anti-communist revolts – a theory denied by former Soviet President Mikhail Gorbachev.

Agca initially claimed he was acting alone in the attack. Later he said he was trained by Bulgarian and Czech experts and blamed the KGB for the attempted assassination.

During his trial in Italy, however, Agca said part of his testimony had been lies, and Italian courts ruled there was insufficient evidence to support claims of Soviet involvement.

Italian newspapers reported in April 2005 that recently discovered documents in the archive of the Stasi, the secret police of former East Germany, appeared to link Bulgaria to the attack. Bulgarian officials, however, denied any involvement.

Pope John Paul II himself, in a book published last year, said he believed Agca was a "professional assassin" who carried out the shooting for somebody else.

The pontiff did not directly say who he thought was responsible, but called it "one of the last convulsions of the 20th Century ideologies of force," which he said included communism.

John Paul for many years said he believed the hand of the Virgin Mary deflected Agca's bullet. For his part, Agca – who said he and John Paul declared "brotherhood" during their meeting - has sometimes suggested his actions were part of God's plan — a claim dismissed by Vatican officials.