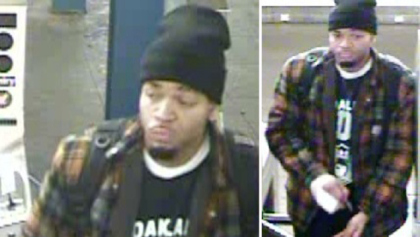 NEW YORK -- A man was stabbed Tuesday on the New York City subway and didn't realize it until he got home, CBS New York reports.

The 42-year-old was waiting at a station in Queens when he first felt someone push into him with a hard object, according to the station. He told police it happened again as he was boarding and two more times as he got off the train a couple of stops later.

The station reported police saying the victim discovered he had been stabbed in the buttocks four times when he got home. He was treated at a hospital and released.

The suspect is described as a black male, 25 years-old, 6-feet tall and 220 pounds, with a cast covering several fingers on his right hand. He was wearing a plaid jacket, Oakland Raiders shirt, black hat and black pants.

No arrests have been made, according to the station.

It's the third assault on a New York City subway involving a knife in recent days, the station reported.

Police were also searching late Tuesday for a well-dressed woman caught on video riding the subway and proclaiming that she was going to "cut" someone and "get away with it" She allegedly went on to slash two people on the train in Brooklyn, CBS New York reported.

Two men were slashed with a box cutter in November, also on a subway in Brooklyn, CBS New York reported.

Police confirmed that two men -- Matthew Ruff, 23, and Oneal Mendez, 32 -- were slashed by a suspect who witnesses said didn't speak a word as he sliced Mendez's head with the box cutter blade. Police said Ruff tried to leave the area afterward, and the same suspect slashed his head, according to the station.

The victims suffered non-life-threatening injuries, police said, and they were treated at a hospital.