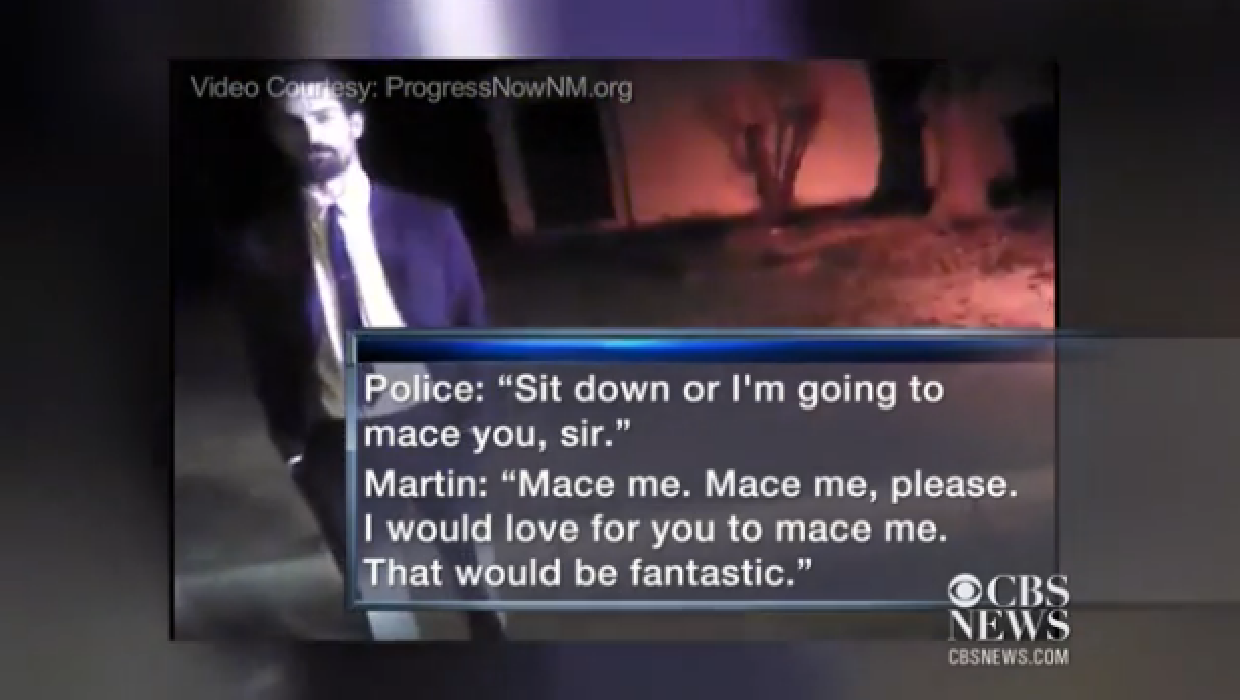 ALBUQUERQUE, N.M. - Video has recently surfaced of an arrest in which a University of New Mexico law student says he was kneed in the groin by an Albuquerque police officer, forcing him to have surgery to remove an injured testicle.

Sam Bregman, attorney for 24-year-old Jeremy Martin, said earlier this month the law student had to have the emergency surgery following his arrest for aggravated driving under the influence and possession of marijuana.

According to a criminal complaint, Martin was pulled over April 25 by officer Pablo Padilla after he was seen running a stop sign.

The complaint says Martin was in a car with others and was asked to sit on a curb.

However, the complaint only says Martin "actively resisted" Padilla's instructions and was handcuffed.

The arrest was captured on video via an officer-worn lapel camera, and the organization Progress Now New Mexico, a self-described non-profit advocacy group, made it public. In the video, the officer can be heard repeatedly asking Martin to sit down.

"Sit down or I'm going to mace you, sir," the officer says.

"Mace me. Mace me, please. I would love for you to mace me. That would be fantastic," Martin responds.

Eventually, after Martin continues to refuse to cooperate with the officer's demands to sit down, the officer is seen grabbing Martin, telling him to "turn around."

Martin is then heard saying, "Stop using aggressive force. Don't kick me in the n**s. Aw, you motherf*****."

Martin then appears to be pushed to the ground face first and is handcuffed behind his back.

According to a press release from Progress New Mexico Now, the officer involved in the incident has recently been placed on leave pending an investigation by the department.

The Albuquerque Police Department (APD) declined to comment on the matter to CBS News' Crimesider, saying it is a personnel issue.

The incident came just weeks after the Justice Department (USDOJ) announced that a lengthy investigation found the APD had engaged in a pattern or practice of excessive force.

"In this one video, we see almost every problem the USDOJ identified in action on our streets. Instead of asking for backup or using less physical compliance techniques, the officer puts away his tools and overwhelms an young intoxicated man with such force in a most sensitive area that he causes the man to, understandably, respond even more strongly," Patrick Davis, a former police officer and executive director of Progress New Mexico Now, said in a statement.

Prior to the announcement by the DOJ, the APD faced intense criticism for 37 shootings by officers since 2010 - more than 20 of them deadly.

The department had also just been scrutinized over the APD's fatal shooting of a homeless man who had threatened to kill officers. The man was gathering his belongings and turning away when officers opened fire, helmet camera video shows.

The attorney for Jeremy Martin has said they plan to file a federal lawsuit against the APD, according to CBS affiliate KRQE.