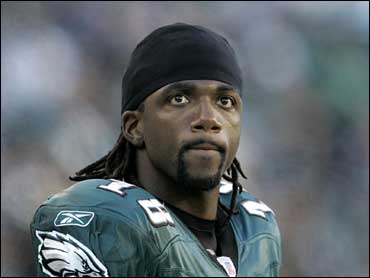 A pedestrian wasn't in a crosswalk when Cleveland Browns wide receiver Donte Stallworth hit and killed him with his Bentley, according to a report released Tuesday by police in Miami Beach.

According to the report, Stallworth told officers he flashed his lights to try to warn 59-year-old Mario Reyes, a construction crane operator who was rushing to catch a bus after getting off work around 7:15 a.m. March 14.

Police said Stallworth was driving about 50 mph in a 40 mph zone. They are investigating whether alcohol played a role in the accident. No charges have been filed against Stallworth pending the outcome of blood tests.

A police diagram shows that Reyes was hit in the far left lane of the six-lane MacArthur Causeway - not in a nearby crosswalk. Stallworth stopped a few feet away.

The first, a woman, said, "There's a man laying in the middle of the road." The dispatcher asked for her location and a description of the victim.

Then the woman blurted: "He's dead. He's dead ... He was just laying in the middle of the road. I think he's dead."

None of the callers apparently witnessed the accident. One man, saying he was on his way to work, said he "heard a hit" and then saw Reyes lying in the roadway. A few moments later, a police officer arrived.

Stallworth's attorney declined comment Tuesday but has said his client is cooperating with police. Stallworth last week released a statement saying he was "grief stricken" over the accident.

Stallworth signed a seven-year, $35 million contract with the Browns before last season but was injured most of the year. He was scheduled to receive a $4.75 million signing bonus the day before the accident. Before that, he played for New England, Philadelphia and New Orleans in the NFL and in college for Tennessee.

Stallworth's best overall season was in 2005, when he caught 70 passes for 945 yards and seven touchdowns as a member of the New Orleans Saints.