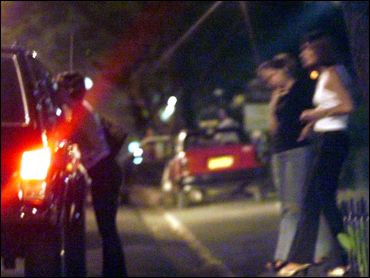 The discovery of a decomposing body in a camper led police to arrest a man in the deaths of at least five prostitutes found dead near Phoenix's red light district in the past nine months.

Police said the man arrested Saturday, Cory Morris, 24, admitted involvement in five deaths, including that of the woman his uncle found in the recreational vehicle where Morris sometimes lived. He was being held on suspicion of murder and charges were pending.

Melva Willis, Morris' aunt who owns the property where the camper was parked, said her husband called police Saturday after finding the body beneath blankets and a sleeping bag. She said police told them the body was at least three days old.

"Everybody who has ever met Corey says this can't be real," she said. "I don't know, but there's just too much evidence. ... If he admits it, what else can I say?"

Since July, the bodies of six women have been found in the Garfield neighborhood north of the Arizona Diamondbacks' stadium — just blocks from Phoenix's red light district on East Van Buren Street.

Autopsies on four of the women show they died of cocaine overdoses.

"We believe Morris was basically picking up the women on Van Buren Street, taking them back to the RV, having sex and doing cocaine," said Phoenix Police Detective Tony Morales.

Morales said he could not yet discuss how the women were killed, but said investigators are certain the deaths are homicides.

Morales said police acting on an earlier tip had already been looking for Morris, who periodically stayed in the RV. He was arrested at a nearby bar, where he worked as a karaoke disc jockey.

Morris moved to Phoenix a couple of years ago from Oklahoma and began staying in the camper in the summer, about the same time the first body appeared, Willis said.

"Over the next weeks and months we will have to explore where Morris has been and where he's come from," Morales said. "There's a possibility, a chance this may have been happening somewhere else."

One month after Codman's death, police found the body of 32-year-old Shanteria Davis just yards away. The proximity to Codman's and Irvin's bodies and the similarities in their deaths caught investigators' attention.

On Feb. 27, Jade Velasquez's body was found under a palm tree. On March 29, Sherry Noah, 37, was found dead across the street from a church.

All five bodies were found within two blocks of the RV where Morris stayed.

The death of a woman whose body was found Dec. 9 just a few miles south of the neighborhood is no longer believed to be connected to the case, Morales said.