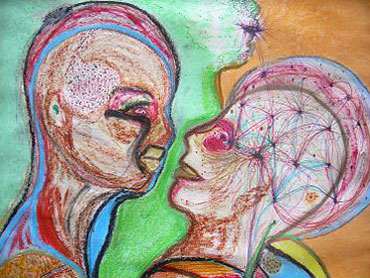 Tommy McHugh doesn't paint because he wants to. He paints because he can't stop.

McHugh, 60, never particularly wanted to be an artist, reports CBS News Correspondent Mark Phillips. In fact, it never occurred to him in the rough Liverpool, England street life he'd been living as a handyman and occasional street fighter.

Then, says Phillips, McHugh, felt a terrible pain in his head from a double brain aneurysm - leaking blood vessels that almost killed him.

When he came out of the coma a week later, his whole life had changed. He had become an irrepressible artist.

"I can only live it one day at a time," McHugh told CBS News. "So I work happily trying to complete as much as I can."

For up to 18 hours a day, he paints. No surface in his house is safe.

The theory, Phillips points out, is that the aneurisms altered the temporal lobes of his brain - the parts that contribute to visual processing - the artistic bits.

His work now fills up a gallery, and he's decided to use his fame to encourage over would-be artists by providing space for their work to be displayed. "There's a lot of other people around Britain and the world who are fighting individual loneliness and isolation (from) illness," McHugh says.

It took a near-death experience to change McHugh's life, Phillips observes. Now, he's a walking medical mystery, trying to prove art can be an outlet for others the way it's been for him.

Dr. Alice Flaherty, a neurologist who's worked with and studied McHugh, told "Early Show Saturday Edition" co-anchor Erica Hill it's "very rare" that something like what happened to McHugh occurs, "especially in this way, where things get better. But, in Tommy's case, I think two things went on. He got more emotional about everything, cared more about a lot of things, and also a little dis-inhibited.

"Well, he's pretty straightforward and says this wasn't a talent that was hidden. (He says) 'I had no interest in art.' And I have it believe him."

Flaherty says when McHugh first began talking after emerging from the coma, he was writing poetry and speaking "in rhyme for months. He just couldn't stop rhyming."

Asked by Hill whether McHugh's case could show we all have hidden talents somewhere inside, Flaherty downplayed the notion, saying, "I wouldn't want to rule it out, but I think most people who have injuries like him get a lot worse and not better."

But Flaherty said she has seen similar cases and, "They all get more emotional. Of the other patients I know, some of them had interest in art or in music before and some of them clearly didn't and had to learn it as they go. But all of them became me emotional."