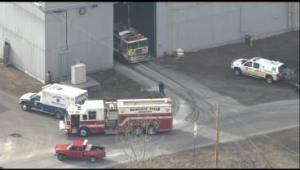 FALLS, Pa. A man has died after falling into a sugar vat at a processing plant in Pennsylvania.

Police received a call from workers at CSC Sugar Plant in Falls township to report a missing co-worker just after 2.30pm on Monday. The man's car was still in the parking lot but he had not been seen for about an hour, according to CBS Philly.

The man's pants were later found inside a sugar hopper, where his body was eventually found.

The victim has been identified as Janio Salinas Valerda, of Edgewater, New Jersey, who was on a catwalk above the vat when he apparently slipped and fell in.

''I guess somehow or other he fell into the hopper while he was trying to unclog it," Campbell told The Morning Call newspaper.

"Apparently, they had trouble with this hopper all day long," he said. Valerda's fellow workers were not sure where he was when they called in a subcontractor to check what was stopping up the funnel, Campbell said.

An autopsy is scheduled to determine if Valerda suffered a medical condition prior to his fall. Police say there is no indication of foul play.