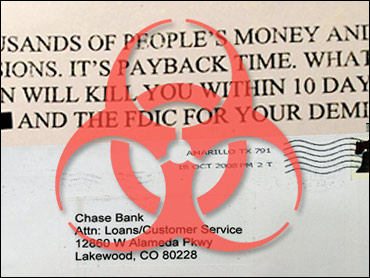 A man apparently upset about losing more than $60,000 when the government took over a failed bank has been arrested on charges alleging he mailed threatening letters containing suspicious powder to banks and federal offices, authorities said Tuesday.

Richard Leon Goyette, who also goes by the name Michael Jurek, was arrested Monday at the Albuquerque airport and is scheduled to make a preliminary court appearance later today. He is charged with a single count of knowingly and intentionally conveying false and misleading information.

The letters, mailed to Chase Bank branches, FDIC offices and the Office of Thrift Supervision, contained white powder and threats warning that whoever opened the letters would die within 10 days, reports CBS News correspondent Bob Orr. Field tests on the letters proved the powder to be non-hazardous.

Goyette is accused of mailing 65 threatening letters in October to financial institutions and federal regulatory offices in 12 states. Sixty-four of the letters contained an unidentified white powder. Officials said Tuesday that the powder was calcium carbonate, a major component of blackboard chalk.

The 65th letter was to Chase Bank. It contained no powder but included a threat of the "McVeighing of your corporate headquarters within six months." Timothy McVeigh was executed for the 1995 bombing of a federal building in Oklahoma City that killed 168 people.

The other letters, included the message "It's payback time," according to the FBI.

Investigators say one day prior to the letters being postmarked, Goyette rented a car in New Mexico. He returned the car 24 hours later after driving 630 miles. Investigators believe he made a round trip to Amarillo, a distance of about 568 miles, Orr reports.

Goyette waived his right to detention and identification hearings Tuesday during an initial appearance in Albuquerque and will be returned to Texas to face the charges. He did not have an attorney present at the initial appearance.

Robert E. Casey Jr., special agent in charge of the Dallas FBI office, said Goyette had an airplane ticket to a domestic destination when federal agents arrested him. Goyette has a criminal background, but Casey declined to say where and when he had been arrested.

In late September, officials said, Goyette sent e-mails to the Office of Thrift Supervision, a federal agency that a day earlier had taken over Washington Mutual Bank, officials said. In one e-mail, Goyette wrote that he lost $63,525 in stock because of the bank's failure.

Goyette e-mailed the agency three days later, providing his name and New Mexico mailing address, officials said. Goyette wrote: "This seizure was the final straw and I will now pursue any path to get the return of my investment. Since legal means are apparently useless, I will have to consider any viable method applicable to rightfully reclaim my stolen funds."

About three weeks after that e-mail, threatening letters began showing up at the FDIC, the Office of Thrift Supervision and branches of Chase Bank, which had bought Washington Mutual's deposits, branches and loan portfolio from the FDIC, officials said.