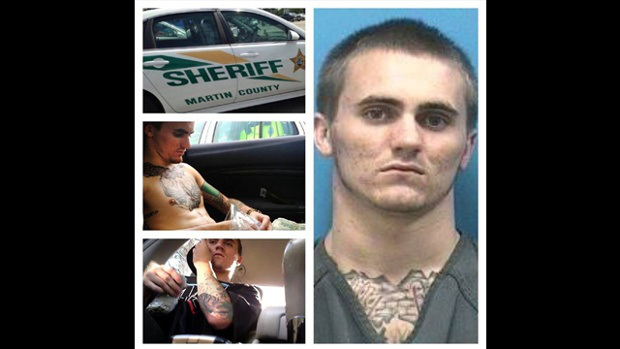 PORT ST. LUCIE, Fla. - A South Florida man was arrested after he made a not-so-smart move by posting a Facebook selfie with stacks of drug money and marijuana just feet from a sheriff's squad car, reports CBS Tampa Bay.

The Martin County Sheriff's Office (MCSO) says Taylor Harrison, 21, posted the photo with the intention of showing how easy it is to sell drugs in front of a deputy. But, it backfired when Taylor had his mugshot posted to the sheriff's office Facebook page after he was arrested for selling drugs to an undercover narcotics detective.

The sheriff's office was happy to return the favor after seeing Harrison's own Facebook page and finding images of him dealing drugs right next to their own department's officers and vehicles.

"Since Taylor was kind of enough to share photos of us on his Facebook page, we thought we would share these photos of Taylor on our page," the sheriff's office posted on its Facebook page Friday, according to the station.

The sheriff's office reportedly posted four photos with the title, "When Selfies Backfire."

The following message was posted along with the photos:

"These are photos of 21-year old Taylor Harrison of Port St. Lucie bragging on his Facebook page about his life as a drug dealer and how easy it is for him to sell drugs in front of our deputies.

The first photo Taylor took himself as he pulled alongside one of our deputies. The second photo is a selfie of Taylor with stacks of drug cash and drugs that he says he sells. Notice next to his car, is a patrol car.

The third shot is a MCSO undercover camera capturing Taylor selling drugs to one of us. He tells us, he is the best around!

The photo to the right is Taylor's booking photo at Martin County Jail after being arrested for...you guessed it, selling drugs to our undercover narcotics detectives," reads the MCSO page.