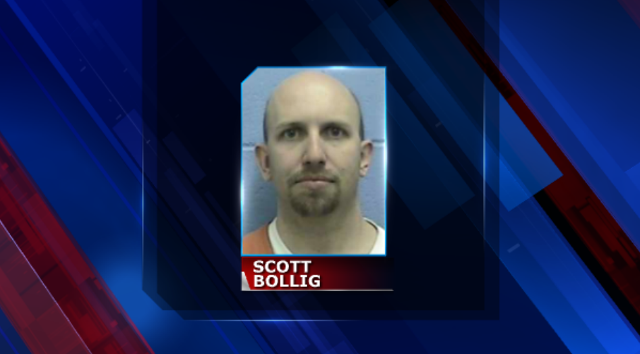 WAKEENEY, Kan. - A northwest Kansas man will stand trial on charges of first-degree murder and aggravated battery after prosecutors say he killed his girlfriend's fetus by crushing an abortion-inducing medication over a pancake she was eating.

Scott Bollig, 30, of WaKeeney will be arraigned Sept. 9 after prosecutors provided ample evidence during a two-day preliminary hearing to have him bound over for trial. He is accused of causing Naomi Abbott to lose her fetus on Jan. 31 by lacing her food with the drug, The Salina Journal reported.

Trego County District Judge Glenn Braun said a hearing will be scheduled on a motion to suppress statements Bollig made to law enforcement. The motion alleges the statements were made before he was properly advised of his rights.

On Thursday, WaKeeney Police Chief Terry Eberle testified that Bollig admitted to lacing a pancake he served to Abbott without her knowledge on Jan. 26 or 27, and that she ate three-fourths of it.

Bollig told investigators he purchased five pills for $60 over the Internet on Jan. 14 and picked them up Jan. 22 at the post office, Eberle said, adding that Bollig said he threw the other four pills away after Abbott lost the 8- to 10-week-old fetus.

An investigation began almost immediately after the fetus' death, Eberle said, because an officer had informed him that Abbott - a Trego County jailer - had expressed concerns to another officer that her boyfriend might be putting something in her food to terminate her pregnancy.

On Friday, Hays pathologist Dr. Lyle Noordhoek, who performed an autopsy on the fetus, said a sample of blood serum taken from Abbott had tested positive for mifepristone, which should be administered under a doctor's supervision because of the risks associated with its ingestion.

Noordhoek said he had reviewed a copy of instructions he was told came with the pill that Abbott consumed, and that they appeared to have been written by someone for whom English is a second language and did not meet Food and Drug Administration requirements.

During the hearing's two days, Bollig's attorney, Daniel Walter, questioned investigators about the tactics they used when interrogating Bollig, including whether they had properly read him his rights or coerced him to make incriminating statements.

He also questioned why no audio or video recordings were made of a Feb. 20 interview conducted by Eberle and Kansas Bureau of Investigation agent Kevin Campbell that concluded with Bollig's arrest.

"I guess I'm from the old school," Campbell said. "If there's two cops in a room interviewing a person, you don't need a recording."